4 things you unconsciously do every day that weaken your marriage

Do You Realize What Your Eyes, Hands, and Head Are Doing to Your Marriage?

Communication is more than talking, and not everything that weakens your marriage is said with words.

Most things that signal your anger are said with your body. Watch what your eyes, hands, and head are doing. They might clue you in as to how you could be unconsciously weakening your marriage.

Eyes at the sky

We all know how this works. Your partner says something that doesn't seem right, and you show your opinion by looking at the sky in a very dramatic eye roll. It's almost like you think your partner is blind, unable to see what you are saying with this gesture. But rolling your eyes sends a very direct message: "I do not think what you're saying is right, and I'm not looking to understand what you mean." No wonder your spouse gets angry before you have a chance to say anything.

If you really want to prove you are being defensive, cross your arms. The act of crossing your arms physically and emotionally closes you off. You are not opened up and willing to listen, shutting off from the discussion. A person with arms uncrossed will feel and appear friendlier, more willing to understand what's being said instead of fighting tooth and nail.

Turning the other cheek

While this biblical phrase means to forget and forgive, physically turning away during an argument paints you as angry and uninterested. This sends the message, "I do not care about you enough to look at you." And the message is effectively received. Though you might be angry and upset, don't overexaggerate those emotions by turning your head.

There's nothing worse than feeling like you're talking to a wall. So why let your partner experience this feeling? When you refuse to talk, it communicates disrespect. By not saying anything, your body is doing all the talking, and you won't come to a resolution.

It's appropriate to get frustrated and upset at times, but these small gestures communicate deeper hurt and anger. Just because you are angry doesn't mean you should treat your spouse with disrespect and close-mindedness. There is no way to solve problems when you refuse to talk, act defensive, and roll your eyes at what's being said. Don't let tiny body movements chip away at your marriage.

Communication is key, so work to communicate clearly with your body as well as with your words.

This is an adaptation and translation of the original article, "4 cosas que haces a diario sin darte cuenta, y debilitan tu matrimonio." It has been republished here with permission.

Denhi Chaney has a master's degree in Marriage and Family Therapy. Denhi is also a wife and mother of a child.
nextarticle 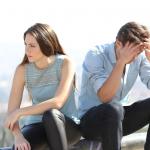 5 Ways to Ruin a Good Relationship