4 ways to prevent a crisis in your marriage

Any Couple Can Make It Through Any Crisis if They Remain Committed, But It's Far Better to Prevent the Crisis From Happening in the First Place.

This morning, I sat down with a married couple in crisis. The exhaustion and frustration was evident in their weary faces before either of them spoke a word to tell me about their situation.

They, like many couples, are both juggling the demands of stressful careers, parenting, and several major life transitions all happening at once. In their frenetic pace of life, their marriage had been on "autopilot." Their time together was scarce, and even when they were together, they were usually too exhausted and distracted to engage in meaningful conversation.

In the midst of this tiring season, the husband had developed a "friendship" with a female work colleague. The wife became uncomfortable with their closeness and asked him to stop texting with her, and he agreed. He then made the terrible choice of continuing the communication and concealing it.

When the wife discovered the longterm pattern of deceit and the escalating level of intimate dialogue between them, she was furious. Her first response was to pursue divorce. She didn't think she could continue loving a man who had broken her trust with such a deliberate pattern of deception.

They now sat in my office, brokenhearted, regretful, confused, exhausted and looking for answers. They wanted to keep their family intact, but they didn't know where or how to begin.

I shared with them how to rebuild trust and the keys to forgiving, healing and moving forward.They agreed to work towards healing, and I believe these tools will help them move forward.

I believe any couple can make it through any crisis if they remain committed, but it's far better to prevent the crisis from happening in the first place.

Below are four keys to prevent a crisis in your marriage:

1. Don't wait for a crisis to happen before you make your marriage a priority

The crisis was the "wake up call" this couple needed to made some drastic realignment of priorities, but the "crisis" could have probably been prevented had they been proactive about prioritizing the marriage in the first place. Time is the "currency" of relationships, so if you want to start investing into your marriage, start by investing more time.

2. Don't "outsource" things only you and your spouse should be doing

When we feel like our sexual needs aren't being met, there's a temptation to "outsource" that need through pornography or romance novels or even through an actual affair. When we feel that the emotional support needs aren't being met, we're tempted to "outsource" those through a secret "friendship" with someone else of the opposite sex. Anytime we're getting a marriage need met outside of our marriage, we're being unfaithful and sabotaging the marriage.

3. Watch out for the digital distractions

In our age of constant connectivity, it's possible to be in the same room with your spouse, but still in different worlds. Use technology to keep you connected, not distracted. Be very careful of the ways your smart phone might be hurting your marriage.

In marriage, secrets are as dangerous as lies. Communication does for a marriage what breathing does for lungs.

This article was originally published on Patheos and has been republished here with permission. 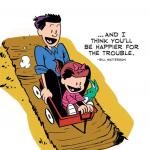 The Creator of Calvin & Hobbes Said All…