Face It: Men Are Different. Sometimes These Differences Drive Women in Their Life a Little Bit Crazy. Here's Why and How to Deal With It.

It's not a myth. It's a medically proven fact. And it's not fair! Women can work as hard as a man in a race to dump those extra pounds, and, in most cases, he'll win. Here's why:

According to the director of nutrition for WebMD, "The simple truth is that men are larger and have more muscle than women due to the hormone testosterone. They are genetically designed to have a higher percentage of muscle and less fat — which works in favor of keeping them fit and allowing them to eat more calories."

A recent study showed that "women had to perform 20 percent more exercises to achieve the same benefits as men." Not fair again! However, all is not hopeless.

Researchers also found that although men lost weight faster, "By six months, the rates of weight loss among both men and women were identical."

So keep working toward those goals, ladies. It will all pay off sooner or later.

2. Men don't seem as concerned about family matters as women

She may be thinking, "Why can't he remember the kids' birthdays-or mine?" Or, "What makes it so he can turn over and go to sleep when I'm still worried sick over Bobby's failing grades?"

Some women think their men are simply clueless when it comes to some of the things that matter most to them.

Men have the ability to compartmentalize. They can think about something then tuck it away in it's own little compartment while they move onto something else they consider more crucial at the moment.

This is a great advantage when they carry the main load of providing for the family. Their thoughts are not scattered to every family concern, but are rather focused completely on the task at hand. It's a gift. Click to learn and laugh about this.

Instead of being annoyed by your husband's compartmentalizing, appreciate this unique feature. Also, know that your man will appreciate your gentle reminders of the things that are important. He wants his family to be happy. He just needs a nudge, not a nag.

Your man may be like Gibbs on NCIS. Now there's a man of few words. Probably millions of female viewers are at home screaming at their TV: "Say the words, Gibbs! Say the words!"

That's what women want-more words from their man. A wife wants to hear more from her husband. She wants him to express his feelings to her. He's more comfortable with thinking his tender thoughts than expressing them. It doesn't come as naturally to him as it does for her.

There are likely many reasons why this is true, but in some cases it's because he can't get a word in edgewise. Because women's minds are on speed dial, if he wants to contribute to a conversation he's got to jump in when she takes a breath. That's hard for him, so he'll mostly remain quiet and do his best to appear to be listening.

Here's the remedy: stop doing all the talking, ladies. Ask your husband for his opinion, then listen. Resist the temptation to jump in. Sometimes just listen. You may be pleasantly surprised at what he has to say.

You open the door to your teenage son's room and the scent of his dirty socks hits you like a slap in the face. It's immediate. You may invite your husband to the scene, and he may say, "What smell?"

There's a reason for this. A woman's sense of smell is far more acute than a man's. Don't get down on him because he can't smell the stink emanating from the kitchen trash can or the skunk that tip toes through your back yard in the middle of the night.

Part of the reason for this has to do with your female hormones. "Some studies have shown that during ovulation, there's a surge of estrogen which increases [olfactory] sensitivity."

Watch a woman when she receives a bouquet of flowers. The first thing she does is smell them, drinking in their unique fragrance. It's the same reason she enjoys perfume.

Women need to appreciate this gift and cut her honey some slack for not having it.

5. Men love to flip through the channels

Why does he do this just when the show is getting good-at least to you. He probably does it during the commercials, which seems a legitimate time. But he doesn't stop there. He hits on a show that looks better than the last and stays. At least until the next commercial.

Why can't he just stay put? One man said it this way, "I don't care what's on. I just want to know what else is on."

That's how they watch multiple ball games at once. Flip, flip, flip. He can do this and even keep track of the different players and scores. It's a gift. This is a guy's way of multitasking.

It's not just your guy. It's guys. They are flipping made this way.

To be able to endure it, make a deal with the devil-er, your man-and take turns owning the clicker. Or get separate TVs. Just because you differ in your TV shows doesn't mean you don't have a happy marriage. It's all in how you deal with it. Don't let it drive you crazy. Do something about it that brings harmony.

When all is said and done, both need to stop being so annoyed by differences. Celebrate them instead. God did a pretty good job distributing the differences in the way that makes for a happy combination when the two come together.

Hooray for the differences! 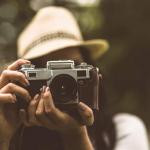