Everyone Knows Marriage Takes Work. But Despite All the Advice You Get, These Things Are Certain to Take You by Surprise.

I've been married for a little over 10 years now. Most of those years have been pretty darn good. But there have been a lot of other times in between that weren't so good. That's not to say those times were bad. They were just ... unexpected. Times that range from funny to strange to challenging to awkward - and everything in between. Yeah, I expected marriage to be loving, and I expected it to be challenging, but some things I just didn't expect at all.

Here are five things I never expected about marriage.

1. Marriage isn't all about romance

Yes, marriages are supposed to be romantic, but they're not all about romance. There are just more important things to do. Instead of using your spare time thinking of what you're going to do to impress your spouse (like you did when you were dating), you have house repairs to do, kids to help, dinner to fix, etc. If you spent all (or most) of your time trying to romance your partner, you wouldn't get much done and you wouldn't be much of a good spouse after all.

2. There's a reason for all the jokes

Before I got married, I heard all sorts of jokes about marriage. There were jokes about in-laws, intimacy, kids, money, etc. When I heard them, I thought that some cantankerous soul in a bitter marriage probably made them up. "I'll never have those kinds of problems," I thought. But after being married a while, I realize these jokes were probably made up by someone in a (mostly) happy marriage after all - because the jokes are, in fact, true.

Everyone knows marriage isn't always smooth sailing. But that doesn't mean it's always challenging when it's not going smoothly. Sometimes it's just awkward. For example, there are a host of embarrassing medical problems that arise in a person's life. Before marriage, you'd have a family member take you to the doctor for these embarrassing things because you didn't care if that person saw you looking awful. But when you're married, your spouse takes you. And your spouse sees you in all your embarrassing glory - before, during and after. And sometimes that makes a hard image to shake off when you're going in for a goodnight kiss.

Sometimes you just want to sit down by yourself and read that dicey romance novel you've heard about. And other times you want to take a drink and some nachos into the living room to watch a horror movie you've been waiting to see. But when you're married, these things you like to do in private are out in the open. So, you'd better be prepared to answer when you're asked, "What's that you're reading?" And you'd better get used to watching a movie you both like and leaving the nachos in the kitchen because your spouse may not like chip crumbs on the couch. 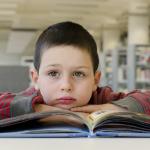 Dear Parent: About That Kid ...