5 signs he’s not mature enough for a relationship

Seeking Out a Mature Man Isn't Always Easy; But They're Out There Waiting and Searching For the Right Woman to Be Their Companion.

Here are some signs he's not mature enough for a relationship:

1. He takes little or no responsibility for his actions

A guy who can't own up to his actions is definitely not mature. In the real world, we are all responsible for what we do and say, as well as what we don't do or fail to do.

2. He only works a summer job

No, I don't mean that he's in school and works a high-paying job and saves during the summer to support himself (that's a really good thing, actually). The type of guy I'm referring to works for only a few months a year and spends all that he earns the other nine. He finds himself broke every year, has no savings, and then goes and works odd jobs or a summer job to continue feeding his bad habits.

Even worse, he may not be able to hold a job at all. This could be for many reasons, but see item number one on this list.

3. He has no direction

He's likely dropped out of school and has held the same position at work for a long time. He gets up, goes to work, comes home, eats, sleeps, repeats. Maybe on the weekends he hits up a party or two, or he sits around playing video games with all of his spare time. Maybe he travels a lot without ever really ending up anywhere. Be careful of this man; if you are with him long-term, he will drag you down with him.

If there's anything more indicative of a man who doesn't want responsibility, it's this guy. He's wishy-washy; he changes his mind often. He has missed lots of opportunities.

These types of guys are known to call off engagements and get cold feet on their wedding day. Even worse, they could leave after you marry them. Not being able to make important decisions is a serious lack of maturity.

5. Everything is a competition to him

This is perhaps one the most unnecessary things a woman can consistently endure. If your man has to always be better than you, is always trying to be No. 1, and never congratulates or appreciates your successes, watch out.

Competition's companion is put-downs. If your man can't compliment you, tell you that you're beautiful and that he thinks you're wonderful, then he isn't the right kind of person; at least not yet.

Sometimes it can be hard to figure out if your guy is actually an adult. He may be good at covering up his immaturity for a time, but it will come out eventually.

If you find yourself in a relationship with an immature guy, it's not the end of the world. Carefully assess the situation, talk to a close friend, a mentor or even a professional about the situation. If you're not sure what an emotionally mature man looks like, ask your friends who seem happy and secure in their relationships what they like most about their boyfriend or husband.

A mature man will exhibit adult characteristics on a consistent, day-to-day basis. Seeking out and finding these men isn't always easy, but they're out there, waiting for a strong, mature, independent woman to come along and help them feel complete.

Dennis has a degree in business management, and a rather colorful dating history before meeting his wife, Jessica Child, whom he married in 2015. His areas of expertise include financial planning, marketing/advertising, and startup management.
nextarticle 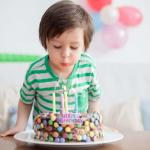