Let's Be Honest, Marriage Isn't Always a Bowl of Cherries. So, Why at Weddings Do We Act Like It Is? Wouldn't It Be Refreshing to Hear Some Real Advice? Here Are 5 Things Married Couples Know That Newlyweds Need to Hear.

"To happiness, health and laughter in all your days."

I have NEVER been to a wedding where anyone toasted anything other than fluffy love stuff. Let's be honest, marriage isn't all sunshine and rainbows. It is definitely one of the greatest commitments and acts of love there is. That doesn't mean there isn't a thunderstorm or two before the rainbow. If you want to give the beaming bride and groom some advice, you might as well be real about it.

So, the next time you hear, "To the bride and groom"" just remember what helpful advice could follow.

I don't care who you are, marriage takes work and commitment. It doesn't matter if you've been married 65 years or 5 years, the fact that you are still married says a lot about you and your spouse. At any point in time, that couple married for 65 years could have thrown in the towel and called it quits. Marriage is wonderful and grand when two people are committed to making it work and fighting for their love. The true love story is the one tangled with ups and downs, highs and lows, the good and the bad, and everything in between. As a newlywed, it's easy to assume it will only be happiness, health and laughter. The rest of us know it's so much more.

This isn't necessarily a bad thing. As a newlywed, you might think you know exactly who you are and who you are marrying. You don't. Marriage brings out a different side of you that you didn't know exists. The two single people that got engaged are different than the two engaged people that got married.

Seriously, I thought I knew my husband before we got married, but you don't really know someone until you've been putting on make-up at the bathroom mirror while your husband victimizes the toilet. After 10 years of marriage, I still wish I had never been introduced to that part of him. And, guess what? Girls poop, too. You didn't really think she was just powdering her nose in there, did you?

Once you are married, you don't need to be on your best behavior anymore. While dating, she might have sat on the couch and rubbed your back while you watched Tiger Woods take an entire hour contemplating his putt. He might have sat through three hours of "The Bachelor" re-runs. Well, not anymore. Marriage is a safe zone, and you are able to let loose and be yourself. Not to say you weren't before, but marriage gives you a little reassurance that it's ok to disagree, and it's even healthy to have separate likes and dislikes.

5. ""¦congratulations. You will now know the true meaning of compromise."

Sure, you've compromised plenty of times before. Like that time you wanted to go to your friends Super Bowl party, and she wanted to go to her friend's memorial for her dog. You compromised and spent a little time at both. It was hard, but you did what you had to do for your partner. Wrong. That was easy. Marriage means you have to compromise on bigger issues. Where you live, where you work, how you spend and don't spend your money. The other person's opinion matters just as much as your own. Blending two lives into one is hard business.

So, let's make a toast to the newlyweds as they prepare themselves for the reality of marriage. It is great, happy and even fun. However, it's easy to forget that there is work involved in maintaining that marital bliss. Sometimes that truth is a little hard to swallow. But finding someone who makes you happy and wants to share his life with you in spite of it all? It's well worth it. 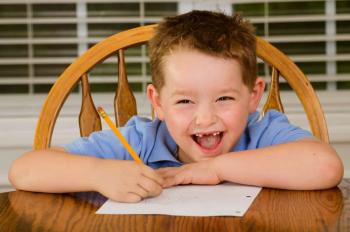 7 Reasons You Should Homeschool Your Kids