5 things to do when your marriage is in trouble

There are simple things that can help you avoid becoming a divorce statistic.

Last week I was sitting down with some friends who are in the midst of a marriage crisis. One spouse had just confessed to the other a past affair with a mutual friend of theirs. I was meeting with them to counsel and encourage them both just days after this bombshell had been dropped and while the emotions were very raw, and trust was fractured, this couple was already taking healthy steps to chart a new course for their marriage.

I truly believe my friends will end up with a stronger marriage than they've ever had before instead of becoming another divorce statistic. That conversation with them got me thinking about the importance of the decision that couples make in times of turmoil. I'm convinced that no matter how damaged the relationship may be for you right now, if you'll commit to the following actions, your marriage can make it!

You'll only get through this tough season if you move forward with complete and total honesty and transparency. Be willing to humbly admit fault and seek forgiveness for every past and present breach of trust. Hold nothing back.

2. Recognize the difference between Forgiveness and Trust

Forgiveness and trust are two different things. If your spouse has broken your trust or you have broken theirs, forgiveness should be given instantly because grace can't be earned, but trust has to be earned and it can only be earned slowly through consistency of action. Fight the urge to punish each other.

3. Be VERY careful where you get advice

When your marriage is in crisis, everyone is going to have opinions about what you should do next. Choose up front to only listen to people who love you, love your spouse and love God. If they're missing any part of that list, their advice will not be balanced with wisdom.

The road ahead won't be easy, but your marriage is worth fighting for! Take it one day at a time, lean on each other, and trust God to take care of the rest. 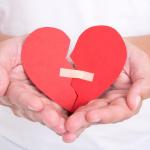 Why My Divorce Didn't Break My Heart