Every married couple disagrees at some point in their relationship. In fact, most happily married couples fight on a regular basis. The difference between happy couples who fight, however, and unhappy couples who fight is in the way they go about it. If approached with the goal to solve a particular problem rather than to prove that are right, arguing is an appropriate way to learn to listen to one another's perspective.

Fighting is good when it's fair; it allows couples to air their feelings, bring to light issues that need to be resolved and work out their differences through negotiation and compromise. However, when fighting becomes an excuse to get back at your spouse, criticize or simply complain, it is not productive. The following tips will help you to manage the way you disagree and avoid turning your fights into bloody emotional battles.

1. Do not fight in public places

Respect your spouse's and your own privacy by keeping your arguments between the two of you. Besides, other people don't want to witness your bickering; it generally makes everyone in the nearby vicinity feel extremely uncomfortable. It is also wise to avoid arguing in front of your children, especially if the fight is angry or heated. It is upsetting for children to see their parents raise their voices at each other. Instead, find a private place to hash things out. Let your children see you show affection for one another after you have resolved things so that they won't worry about the stability of your relationship.

2. Do not fight at any emotionally charged event

Events such as weddings, anniversaries, holidays and birthday parties are often already fraught with family tensions. You also might both be exhausted and wired after planning and putting on one of these functions. This is not a good time to try to resolve marital issues. Wait until you are both well-rested and relaxed to bring up problems that need to be discussed.

3. Do not take everything personally

More often than not, when your spouse says something that hurts your feelings it is the result of miscommunication rather than vindictiveness. It is also helpful to be aware of your own sore spots and recognize that you might be oversensitive in certain areas.

4. Do not blame your spouse for everything

Try to stay focused on the problem that you need to solve rather than who you think is responsible for it. For example, if your teenage son or daughter is rebelling, instead of blaming your spouse for being too permissive, work together to make changes that will help your child respect the rules of the household.

5. Do not pick fights just to get your spouse's attention

Let things go whenever possible. Having it out about every little thing is not worth the time, energy and damage to your relationship. When there are important issues that need to be discussed, however, sit down with your spouse and have a calm discussion. Approach it from the perspective that you have a problem that you need help to solve. This immediately situates you as teammates rather than adversaries. 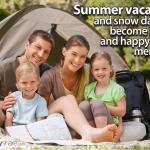 How to Host Your Own Family Day Camp