5 types of women you shouldn’t marry

A reader asked, "What type of woman should I not marry?"

Whenever I'm giving young men marriage advice, I always say, "Find a woman who is low maintenance and highly motivated." It's how I describe my wife Jenny and what I think defines two important characteristics in a good wife. Of course, some women would describe themselves (or be described by their husbands) as "high maintenance" and they are still good wives. However, a low maintenance spouse makes for an easier marriage.

Both of these qualities can be found if a person identifies five distinct qualities and ensures they are not present in the person they desire to marry.

While fathers love to spoil their daughters, little girls should not grow up to be spoiled women. There is nothing wrong with liking good things and wanting a man to provide for his family. However, when a woman feels entitled to things without making an equal contribution, she is not cut out for a successful marriage. To spoil is to change the character of something because of "excessive indulgence." If a woman's character has been compromised because of wealth or material things, stay away from her.

Laziness is often a byproduct of being spoiled, but some people are lazy without being spoiled. A solid work-ethic is important for a happy marriage. If both spouses aren't willing to work, marriage will be very difficult. Work-ethic isn't about drawing a paycheck, it's about consistently making the effort required for a successful life. Whether at a job, around the house, or in the relationship, laziness will kill a marriage. If a person is lazy while dating, they will likely be just as lazy, if not more so, when married.

Emotional stability is often overlooked as a key characteristic of a good spouse, yet it's importance should be obvious. When someone is emotionally stable, they are reasonably predictable. In nearly every case, we know how they will respond. However, when someone is emotionally unstable, we never know what we are going to get. They might laugh at a situation one time and fly off the handle the next time. They might receive a comment as a compliment on one day but then be deeply hurt by the same words the next day. The unpredictable responses can paralyze a spouse. When looking for a spouse, find someone who is emotionally stable.

No matter how great a woman may be, if she is addicted to drugs, alcohol, gambling or any other destructive behavior, it will likely destroy the relationship. The problem with addiction is the active addict is more in love with their substance than their spouse. While a recovering addict can make a great spouse, an active addict cannot. If you love someone who is in an addiction, tell them to fix the addiction and then give you a call. But do not marry someone in the midst of the struggle.

Editor's note: This article was originally published on Kevin Thompson's blog. It has been republished here with permission. 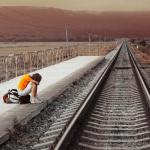 Why is Life so Hard?