6 keys to having a healthy relationship with in-laws

Bad In-Law Relations Can Ruin Your Marriage. Don't Let It Ruin Yours.

Not long ago, I was talking with a young couple and the wife broke down crying over the tensions they were facing in their marriage because of their strained relationship with in-laws. There was tension on both sides of their families, and the strain was smothering them. They had no idea how to fix it, but they knew it had to be resolved for the sake of their marriage (and the sake of their sanity).

One of the most common questions that I get asked on the marriage page relates to have healthier relationships with in-laws. Stress related to family dynamics is one of the biggest struggles married couples face, so it's important to make those relationships as healthy as possible.

Here are some simple ways to improve those relationships and strengthen your own marriage in the process.

1. Show respect even when it's not reciprocated*

I strongly believe that we should show respect even to people who don't deserve it; not as a reflection of their character, but as a reflection of ours. When you show honor to "difficult" in-laws, you're building bridges of peace that will positively impact future generations. It's not easy, but it's worth the effort!

*If things are already healthy, keep working to keep them healthy. If the relationship is unhealthy, ask yourself if you're contributing to the problem or the solution. Be a peacemaker.

In most marriages, one sets of parents (in-laws) gets more time and attention than the other. There are a lot of factors that contribute to this, but you need to do everything in your power to give equal time and attention to both sets of relatives. Favoritism usually leads to resentment while consistency leads to trust.

3. Stay connected to your in-laws (not just your own parents)

Don't fall into the routine of being the one who talks to your parents but then handing the phone off to your spouse every time your in-laws call. When your in-laws call, make a point to answer the phone and have a conversation before handing the phone to your spouse. Show them you value them by giving your time and attention. Find simple ways to invest in your own relationships with them.

A healthy marriage requires that your first and strongest loyalty must always be to your spouse, so don't allow any other family relationship to come between you. Practically, this means never call your parents when you're having an argument with your spouse. That will create an unhealthy dynamic between your spouse and your parents. Also, don't allow anyone (relative or not) to talk negatively about your spouse or do anything that undermines the sacredness of your marriage.

Your family's traditions and ways are probably a lot different than your spouses's family, but both families are equally important, so value those differences. Celebrate the uniqueness of each family and find a way to bring both perspectives into your own family's traditions.

The Bible says that "Love covers over a multitude of sins." In every relationship, when we allow love to set the tone, it has a way of covering over the differences and past hurts and binding us together in a beautiful way. Let love lead the way in your family and everything else will probably work itself out! 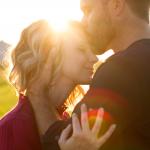