Here Are Six Red Flag Behaviors to Watch Out For so You Can Walk Away Before the Abuse Escalates.

As I work with clients who have been abused, they'll frequently ask, "Why didn't I see that the relationship was abusive at the beginning?" There is no simple formula for predicting future abuse, but there are six warning signs you need to be aware of:

Jealousy is not an uncommon feeling in relationships. However, an article from Domestic Shelters notes that "jealousy, when in response to a real threat to the relationship is normal, as long as it's dealt with by...talking about establishing healthy boundaries that both partners can agree upon. Jealousy becomes problematic ...if one person becomes jealous even when no threat is present."

There is a big difference between a partner asking, "Did you have fun last night?" and being interrogated when you come home. Questions like "Who were you with? Why didn't you answer your phone? How many men were there?" signify a pattern of jealousy, paranoid accusations and constant interrogation, all of which are a red flag of future abuse.

All of us have at least one unhealthy or chaotic past relationship. However, if you meet someone who has numerous chaotic/unstable past relationships, that can be a red flag. If you notice a pattern of jobs, friendships and/or marriages that ended with, "She/he/it was crazy, so I left," be wary. Many of the offenders I worked with reported that they had been violent while dating as young men, and had demonstrated some level of abuse in every serious relationship they had. If every significant relationship has ended badly for your partner, your relationship may end the same way.

Many victims of domestic violence agree that their partners didn't hit them early on. Instead, their partners would use playful aggression as a way to test their reactions while dating. If your partner hugs you to the point of pain, or smashes his fist on a wall and laughs when you jump, he is testing your reaction.

A friend shared that she was in a car with a man on their first date. As she was drinking a soda, he slammed on his brakes. Her soda spilled everywhere and when she asked him what happened, he told her he had done it on purpose because it was "funny." Even though her dress was ruined by the soda, he still thought it was hilarious. She told him never to call her again because she felt that any man who thought making her cry was funny was a sign of potential future abuse.

If you are with someone who uses any of these tactics when upset, (even if they haven't laid a hand on you), it doesn't mean that they won't in the future. Sadly, domestic violence often escalates over the course of a relationship, and if a partner is willing to punch walls or break your things at the beginning, it can be a predictor that things may get worse.

One of the primary components of domestic violence is control. I've had clients whose spouses controlled their computer use, choice of friends, car use and bank account. However, these clients rarely started the relationship by handing over unlimited access to everything. Instead, it was a slow, subtle process that started by their partners taking control over little things.

If your new partner demands access to all of your social media, restricts you from your friends or family ("I don't like them", "they're bad for you", "you need to stop talking to them"), or wants to know every movement you make, be careful. It may be a test to see how much they can control you in the future.

Gaslighting is definedas "a form of psychological abuse in which a victim is manipulated into doubting his or her own memory, perception, and sanity". People who are abusive will use this technique to leave the victim confused and disoriented.

As Joe goes off to work, Victoria calmly asks what time he'll be home. Joe screams, "You're not in charge of me," slams the door and leaves. He ignores Victoria's calls all day and then he strolls in the door, three hours late. Victoria has been worried and terrified that something has happened to Joe and is weeping.

As she apologizes to him, he looks at her and asks, "Why are you upset? Everything's fine." "But you were so angry when you left," she cries. "No, I wasn't," he says as he kisses her. "You were upset. You screamed at me as I walked out the door. But don't worry, I forgive you for freaking out."

Victoria is totally confused and begins to question herself. "Maybe he wasn't that angry, maybe I'm the one that overreacted." If Joe uses this tactic repeatedly, eventually Victoria will doubt her own perception of events, which leaves her looking like the "crazy one" in the relationship.

If you are dating someone and you find yourself continually asking yourself or others, "I feel crazy asking this, but am I the one in the wrong here? I could have sworn it happened like this", that is a serious sign that this person may become abusive.

The most difficult part of predicting future abuse is that many abusive people are very good at hiding their unhealthy behaviors. However, if you are dating someone who starts to exhibit any of these behaviors, seek help from a counselor, victim advocate or the National Domestic Violence Hotline (1-800-799-SAFE). They can able to help you identify if the relationship is unsafe and help you figure out your next step (although be careful, people who abuse often track their partner's computer use or phone use).

You deserve a positive, stable and safe relationship.

Hilary Cobb currently works as a family and individual therapist. She blogs at Blessed By His Love.
nextarticle 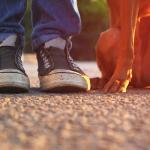 5 Ways to Find Peace When You Are…