These Simple Gestures Are the Ultimate Showing of Dignity, Confidence and Pure Manliness.

Editor's Note: A version of this article was published in the Gwinnett Daily Post. It has been republished here, with permission.

Recently, we went with my daughter and her family to a popular restaurant where we encountered a 20-minute wait and a full lobby. Many patrons sat on benches provided for that purpose, including several able-bodied men.

My daughter is visibly pregnant and has an active 15-month-old who, of course, chose that moment to demand Mommy. So, there she stood, belly protruding, holding a squirming toddler - and not one of the men offered his seat or even glanced in her direction.

Fortunately, Grandpa (that's me) succeeded in coaxing the little tyke away. Eventually, a couple got up when their table was called, so my daughter was finally able to sit down. But I couldn't help wondering, "What's wrong with those guys?"

Has chivalry gone completely out of style? Are boys no longer taught good manners? Or have we simply become so self-absorbed that we fail to notice the plights of those around us?

Whatever the case, I would suggest that the world is a better place when we, as men, resolve to practice common courtesy - especially in regard to women - and encourage our sons to do the same.

To some, this might seem sexist. But with date rape and domestic violence becoming increasingly commonplace, we could do far worse than teach boys to treat women with respect.

Here are some specific gentlemanly behaviors men need to embrace and model for their sons:

As my story illustrates, too many men seem content to loll in comfort while a young mother wrestles with a small child or an elderly lady leans on her cane. That must stop. In a public setting, a man should always offer his seat to a woman. She might not accept, which is her prerogative, but he should at least offer.

We don't hold doors for women because they can't do it themselves. We do so as a sign of respect. If you're too self-conscious or afraid some women might take offense, then just hold the door for anyone, male or female, who happens to be close behind you.

As for car doors, well, few actions mark a gentleman like opening the car door for a woman - whether you're on your first date or you've been married for 50 years.

I cringe whenever I see a woman carrying a heavy box or several bags of groceries, or a young mother with a baby carrier in one hand and a toddler in the other while a bunch of men stand there doing nothing.

It's not that women aren't capable of fending for themselves. They just shouldn't have to. Offering a helping hand might require some courage - "What if they think I'm a creeper?" - but it's the right thing to do.

Pull out her chair

This isn't always practical, and opportunity for it has been somewhat lessened by modern bench seating and fast food restaurants. Even so, in a formal setting, a man should always hold a woman's chair while she seats herself. Again, this isn't because women can't pull out their own chairs. It's just a sign of respect and, perhaps, an acknowledgement of the importance of certain occasions (like a prom date or an anniversary dinner).

When a man walks with a woman on the sidewalk or near any busy thoroughfare, he should always place himself between her and potential traffic. The point is not to patronize women by suggesting they're always in need of male protection; rather, symbolically putting ourselves in harm's way acknowledges the vital role women play as mothers of our children.

Help with her coat

It's always uncomfortable to watch a woman, perhaps holding a purse or other items in her hands, trying to struggle into a coat. (For some reason, a guy with a similar problem just looks funny.)

Don't just watch. Reach out, take hold of the coat, and help her find that armhole. (If it makes you feel better, you can do this for struggling guys, too.)

Get on your feet

Standing when a woman comes into the room seems a little old-fashioned these days. To be honest, it's not always practical or even desirable, especially in a professional setting. But there are times when it's the ultimate sign of respect - such as when several men are seated in someone's home and the lady of the house walks into the room or when a lone woman graces a men-only meeting.

Again, it might take some courage to put these gentlemanly behaviors into practice. You'll probably get some confused or even dirty looks, and you might even be called a sexist (or worse).

Just remember, the way we, as men, behave toward women in public is an extension of how we think about them in private. If we truly value women, we will treat them with respect and deference - and when we consistently treat them that way, we'll find it much harder to objectify them or regard them as inferior. 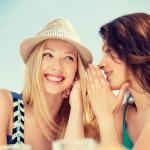 2 Ways Gossip Hurts and How You Can…