7 things a good guy won’t let you do

Good Guys Usually Won't Try to Take Control of the Girl They Love. But It Turns Out There Are 7 Things Good Men Won't Allow Their Women to Do.

When an otherwise savvy woman is getting sidetracked, the right guy will step in and speak up. Take note of these 7 things a good guy won't let you do.

A good guy won't let you:

1. Speak badly about yourself

A good guy won't let anyone speak badly about you, including yourself. When he notices you becoming negative about your self-worth, appearance or abilities he steps in and lets you know that kind of attitude won't be tolerated. He'll remind you of how remarkable you are and how small moments of self-doubt don't need to spell disaster for the day.

A good guy also won't let anyone be unkind to you. And yep, you're included in this one too. Subconsciously you may punish yourself if you think you don't deserve to be healthy or happy, and a good guy won't stand for it. You may make excuses but he won't let you eat that cupcake when he knows you're on a diet or skip that yoga class when he knows you're stressed. Not because he's conscious of your body or needs you to Zen out, but because he is supportive and motivating. He wants you to reach your goals and be your best you.

3. Put him before you

The right kind of man won't let you drop something important to cater to him. It may have been a while since you two could get together, or two important events could conflict with each other. But a good guy can tell when you're leading with your heart and knows you choosing yourself over him doesn't mean you don't care for him. He won't guilt trip you into putting his needs before your own. He'll encourage you to have a full life and invite him into it instead of trying to become your everything.

Good men want and love you the way you are. You've got a good guy on your hands if he doesn't ask you to change for him. He may like someone more athletic, cultured or spiritually inclined, but he accepts you the way you are and loves you however he can get you. If you walk with him in the park instead of climbing that mountain, he's happy. If he takes you to the zoo instead of the museum of natural history, he's satisfied. It's not about being the same; it's about sharing experiences.

A good guy knows you deserve the best and will work hard to provide it. He'll always let you know when you're settling for less than the best. Most of all a good man will walk away when he knows he's not what's best for you and isn't willing to put in that work.

6. Let others take advantage of you

He'll step in when he sees others trying to manipulate or use you. He'll tell you the hard truth about people you love and care for if he sees an unhealthy relationship forming. And yes, he will risk losing his relationship with you to protect you from others.

The right guy won't let you push your feelings down or mask them just to keep him happy. He's happy when you're open and honest and work through your issues. He doesn't want you to pretend everything's okay when it's not and he doesn't view your feelings as a burden.

Good men may be hidden gems, but they'll stick their necks out for the one they love. If your guy chimes in on any of these situations, take it for what it's worth. Because he definitely thinks you're worth it. 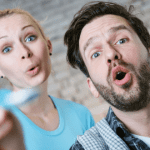 9 Tips You've Never Heard of to Get…