7 things my husband did while I was sick

Caring For an Ill Mate Can Be an Opportunity to Show Your Love. Here Are a Few Things You Might Consider Doing When It's Your Turn.

We all get sick. It happens to the best-and the worst-of us, and we don't like it. Being too sick to go to work, do household chores, or any number of daily duties can be frustrating. But there is one thing that can make it bearable, almost pleasant. Is that even a word that can be connected to being sick? Maybe so.

If we're lucky, we have a spouse who makes the time of misery a little less miserable than it really is. This happened to me recently.

I was feeling poorly for several days. That can get old for the ailing one and really old for her spouse if the illness lingers very long. Here's what he did to make it less miserable for me:

We needed things. The refrigerator needed things. While he was gone he called: "I'm in Costco. What was the name of that bread your sister said you would love?" She had told me how crunchy-I love crunchy anything-it was, and that she bought it there. I pulled up the picture of the package she sent on my phone and told him.

He came home with it, just for me. I know it's just for me because he's not that fond of crunchy nuts and seeds in his bread.

2. He did the laundry

Yep. The laundry. He loaded up the undies first-we were running low. Gotta have clean undies. Then the towels. He even folded them and put them away. Such an act has an almost instant healing effect on me. He dried them with dryer sheets that sent forth whiffs of heavenliness with each caress of the item. What a guy!

He knew I didn't feel like having a conversation with anyone, especially a troubled soul. He protected me. He handled the calls, soothed the needy ones, and let me rest. Ahhh. Now that's a gift.

As I lay there on the couch in the family room by the kitchen he would say, "Now what do I do next?" Then he would do it.

Step by step he chopped onions, carrots, and celery, and added the chicken and noodles with all the seasonings that make this soup so extraordinary. And voila! The soup became a reality. He brought it to me on a tray, and it tasted delicious. He was pleased, and so was I. He likes it, too.

5. He told me I was beautiful

Now that's a stretch. I checked to see if his pants were on fire. I had seen myself in the mirror and became well aware of what a really bad hair day/week I was having. Thanks goodness I touched up my pale face with a bit of lip stick. It must have done wonders. His words made me feel...well, maybe not beautiful, but definitely less ugly.

Hugs are the real healers. His body warmth warms mine. Then he whispers things like "I love you," and "I wish I could make you all better." He pampers my heart with his tender words and loving caresses. They are magic.

Not general prayers. Specific ones. Things like, "bless my wife to sleep well tonight," and "help her feel strength returning to her body."

He gives God something specific to work on. He reminds me of the Bible verse, James 4:2: "Ye have not, because ye ask not." So he asks, in my behalf, and I feel encircled in his and God's love.

I'm certain he's not the only man who shows this kind of loving care to his wife. I have seen the elderly man across the street tenderly caring for his wife who is failing with Alzheimer's. I see another man down the street taking out the trash, and another who is driving his wife to her doctor's appointment. I see good deeds from men all over the place. But the only one I can truly testify of is my guy.

To him I say, "Honey, if you're reading this article, please know that I appreciate all you do for me. I love you. You are my hero."

Now I'm going to try to be his when he needs me. 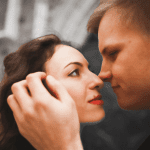 The Four Words You Should Say to End…