Remember That Amazing Guy Friend You Had? Well, Here's What It Was Like For Him When You Got Hitched.

We were inseparable for years. The best of friends. You and me against the world. Then he came along. Now you're married, and here's what I want you to know.

We've had some great times together, but I recognize you're about to virtually disappear from my life. That hurts. It hurts a lot. I'm no longer your main man.

You're madly in love with your husband, which is great. You should be. It means I'm going to slowly fade into the background. Just know I'm going to miss you.

It's how it has to be. Marriage is a huge commitment. Unfortunately for me, being faithful to one man means cutting ties or dramatically reducing time spent with all other men, friends included.

I admit it would look weird if we continued on with our normal hilarious weirdness during the day but then you returned home to your husband at night. It would be inappropriate. I've accepted that, even though it still hurts.

Your husband is a great guy. He's everything you've ever wanted. He's good for you, and you're great for him, but that doesn't mean I have to like him. I'll be nice. I know there's no real reason not to like him other than the fact he's taking you from me, but I can't blame him for that.

I should be grateful for the time we've had, and I am. Time heals all wounds, and I'm sure I'll feel much better after you read all of this. One day soon I'll find a new second half too, and it'll be great.

I probably won't ever tell you this

I fully recognize how selfish (not to mention dramatic and sappy) I'm being, which is why I'll probably never actually tell you these things. You know how unlike me it is to open up about anything.

Normally all of these emotions would most likely be expressed through some fight we would get in soon enough over something stupid. But this wedding is your special time, and I don't want to screw it up.

I really am happy for you

I am. It's hard to show it sincerely, but I'm so happy you've found that special person. He's a lucky guy. It was a day I knew would eventually come (either for you or me), and I know you're going to have the time of your life.

... for everything. It's been fun, Kid. Now, enough of this self-indulgent pity-party. Go have fun! I'm sure I'll see you around. Our kids will be best friends. Don't get old and boring. And please don't blow up my Facebook feed with baby pictures and husband tributes. 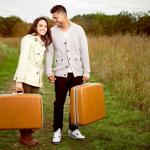 3 Reasons Why You Should Buy Experiences, Not…