7 ways a husband needs respect from his wife

For Many Men, the Drive to Be Respected is Even Stronger Than Their Drive For Sex.

As I've interacted with couples from all over the world and researched the keys to happiness and fulfillment in marriage, one surprising discovery is that most husbands are absolutely desperate for the respect of their wives. For many men, the drive to be respected is even stronger than their drive for sex.

This isn't a new discovery. The Bible records a two-thousand-year-old tidbit of marriage wisdom by stating, "So again I say, each man must love his wife as he loves himself, and the wife must respect her husband." (Ephesians 5:33). There's a great book by Dr. Emmerson Eggerichs called "Love and Respect" which delves into the deeper meanings of love and respect in marriage.

I believe most women genuinely want to show respect to their husbands, but they don't always know how to do it. What a wife may do to show respect and what a husband may need to feel respected are often two different things. To help bring more harmony to your marriage, I've outlined the main ways a husband feels respected from his wife.

This is not a comprehensive list, and all of these may not all apply to every marriage, but I'm strongly convinced these seven principles hold true for the vast majority of men. I'm so thankful to have a wife who shows me much more love and respect than I deserve! Thanks, Ashley.

(In no particular order):

_A husband feels respected by his wife when..._

1. She is content to live within the family's financial means

A husband has a deep desire to be a provider. In our modern society, the man is not usually the sole breadwinner, but he still wants to feel that his work is meeting the needs and desires of his wife. When a wife will life within the family's financial means, she's communicating respect to her husband by validating his hard work and his need to be a provider. She's also removing financial stress from the marriage. (Husbands obviously need to live within the financial means of the family as well).

2. She prioritizes what happens in the bedroom

When a man feels starved sexually, he will often feel both the physical frustration of unfilled desire and the emotional frustration of feeling undesirable to his wife. When the wife will initiate intimacy and also be receptive to his advances, he will feel more respected and fulfilled, and he'll also be more capable of fulfilling his wife's needs.

3. She builds him up with her words (both in public and in private)

When there isn't much laughter in the marriage, that's usually a warning sign of deeper issues. Find opportunities to laugh together. Your husband desperately wants you to be happy. Most husbands can't be happy unless they believe they're making their wives happy. Also, laugh at his jokes. This one might seem silly, but you'd be amazed how important it is for most men to know his wife believes he has a great sense of humor. A healthy relationship should have a lot more comedy than drama.

5. She trusts his judgment

6. She doesn't mother him

There's a motherly instinct in most women, and that instinct can sometimes be misdirected towards mothering a husband. When a wife attempts to change, discipline or correct a husband from the posture of a mother instead of a partner, the husband will feel emasculated and it will often cause a cycle of frustration for both the husband and the wife.

Above all, a husband needs to know his wife has his back. In all times, in all situations, let him know you love and respect him. Your love, your words, your actions and your respect have the power to bring out the best in him. 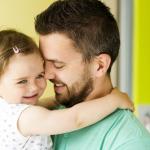 What Father's Day Means When You Never Had…