9 surefire tricks to get a man to kiss you

If Your Love Interest is Having a Hard Time Making the First Move, These Tricks Will Give Him the Confidence to Lean in All the Way.

Thanks to the movies, there's a lot of expectation that goes behind a first kiss. That's a lot of pressure for any guy to deal with.

If your love interest is having a hard time making the first move, use these tricks to give him the confidence to lean in for the kiss all the way.

Girls are famous for moving in groups. For some reason, going to the bathroom is just a lot better when you've got your posse of lady friends to chat with in the next stall. But no one wants an audience for the first kiss. Make sure you're not in an overly crowded place with too many eyes watching. It's hard enough to have the courage to make the move even when it's just you.

Look at his lips

Let your eyes drift down to his lips. Let him catch you glancing at them. He'll either know you want a smooch or wonder if he has crumbs stuck from dinner on his lips.

Watching a movie helps you both slow down enough to relieve some of the stress that can come on the doorstep at the end of a date. Cuddling as you watch the movie will help him be comfortable enough to know you'd be alright with a little kiss goodnight.

Either while cuddling or chatting, turn and give him a kiss on the check. This should be a clear sign to him that it's time to make the move. Plus, your lips will already be right next to his making it really simple for him to just turn his head.

Lean in while he talks

Keep yourself facing him, and when he talks lean in close to his face to hear what he is saying. It shows you're genuinely interested. And, similar to kissing his cheek, it puts your face in close proximity to his.

Lingering on the doorstep (as taught by "Hitch")

Yes, this chick flick speaks true. Whether it's fumbling with your keys or just taking your time in general to go inside, this is a sign to men that you don't actually want to say good night yet. It also causes enough time for him to get the courage to lean in.

Casual, flirtatious touch should be made all throughout the date. But when it comes to letting him know it's that moment, give him a long hug, pull back slightly and look up (or down if he's shorter: we're not judging) at him. Bingo.

If you're feeling bolder, have a thumb war with him, and make a wager that loser has to give winner a kiss. Either way it's a win-win situation for you.

Straight up ask him

Some guys prefer to make the move. But if you're feeling pretty confident of his feelings, and he's just struggling to make the move, you can tell him you want him to kiss you. Or, if saying it seems unromantic to you, make the move yourself and initiate the kiss first. 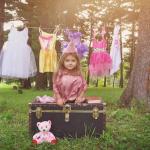 Raising a Princess: a How-To Guide For Tomboys