9 ways you’re at fault for your husband’s behavior

For Every Wife Who Feels Like Her Husband Isn't Pulling His Weight Around the House, It Might Be Time to Assess Your Behavior and See if You Aren't Encouraging Him to Be Irresponsible.

Some wives jokingly say they have three children - their two kids plus their husband.

They complain their husbands don't help out with housework, or have no idea what the family's financial situation is. If this sounds like you, you might want to look at your behavior toward your husband.

Are you enabling, or even encouraging, this type of irresponsible behavior?

Check yourself against the following nine behaviors to see if you aren't to blame for what you might think is your husband's chronic laziness.

Picking up after him

How often during the day do you pick up your husband's dirty socks? Or throw away the trash he leaves lying around? Or sweep up the mud he tracked in from outside?

If you say nothing about this behavior, especially if it bothers you, picking up after him day after day tells him you don't care if he's tidy or if he appreciates the efforts you make to keep the house clean. Women on average do 18 hours of housework a week, compared to just 10 hours for men, according to Pew Research Center.

Yes, working husbands are tired, but that doesn't mean they can't at least put away their laundry and scrape their dishes into the trash. Have a conversation about household chores so you both understand each others' expectations.

Saying nothing about his technology habits

You wouldn't let your kids wander around with their noses in their phones all day without saying something, would you? So why would you let your husband get away with the exact same thing?

If he's never seen without his phone, it could be time to sit down and talk to him about the example he's setting for the children. (Make sure your own technology habits are under control before approaching him about his.)

The more often you and your spouse are able to put the phones and tablets down, the more time you'll have to bond with your kids. And there's no way to set a price tag on the value of that time.

Making financial decisions without him

Many wives do a majority of the household spending. They gas up the cars, buy groceries and pay rent or mortgage payments. When spending is one of your daily chores, you have to know the bank account's balance.

Help your husband feel responsible for your money (and he'll be less likely to make impulse buys) by sitting down and going over the bank accounts with him on a regular basis.

Couples are more satisfied in their marriages and report less stress when they share financial decisions equally, according to a report by UBS Wealth Management Americas.

Neglecting to ask his opinion on parenting matters

What to have for dinner, what you wear, or how to handle minor disciplinary actions can be decided easily by one person, but taking major decisions on yourself creates undue stress an feelings of resentment between you and your spouse.

Don't assume he doesn't care or has nothing of value to offer on important family decisions. Involve him frequently, and you'll find you have more chances to bond with each other, and you'll feel less overwhelmed by the cares of daily living.

Does it bother you that your husband never helps plan vacations or tries to organize family activities? It could be that he feels his involvement is unnecessary because you are so good at doing it already.

Sometimes, wives and mothers get so used to leading their children through each day that they forget to give their husbands a chance to take the lead. Doing so, however, will not only lessen your load of care, but it will also give your children a chance to bond with their father in a different way and benefit from a different leadership style.

Giving up on open and honest communication

Life is busy, but not taking the time to communicate with your spouse can lead to more marital problems, deep-seated resentment and the feeling that you have nothing in common anymore.

Making that effort, even for an extra five minutes a day, to converse with your spouse about your daily successes and challenges will help you feel more involved in each others' lives. You'll be able to supply the support you each need to withstand life's stresses and pressures.

In fact, according to a 2012 study by the University of Virginia reported by the Washington Post, "Married couples who scheduled time together at least once per week were three times as likely to report being happy in their marriages than those who did not." Prioritizing your relationship in this way could pay big dividends in the long run.

The media portrays husbands as lazy, uninvolved or just plain dumb. Don't let this depiction fool you into treating your husband as though he has nothing of value to add to the family.

Putting him down or belittling his intelligence - even jokingly - won't make him more likely to be helpful, it will discourage him from providing any further input on weighty matters and decisions.

Compliment him to show how much you value his opinion, and recognize the hard work he puts in for your family.

Allowing him to let go of his dreams

The sad truth is, many people don't achieve the goals they made when they were young and optimistic, but that doesn't mean he has to settle for an unfulfilling life.

One of the best things you can do for your husband is support him in his career and personal goals, encouraging him to hang on to dreams and doing what you can to further them.

Be his best friend and let him know you are always there for him no matter what. You never know what he might achieve if he just has the right motivation. 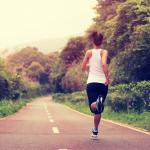 I Run Because He Can't