ABCs of creating unity in your marriage

Becoming "One"ť in Marriage May Seem Impossible to Achieve. Learn These Simple Abcs That Can Help Make It Happen.

In a speech Abraham Lincoln gave about the need for the United States to be united, he quoted from the Bible, "[A] house divided against itself cannot stand."ť (Matthew 12:25) He knew that in order for this relatively new government to succeed, they must become "one nation"ť with a common goal.

This same principle is vital to the success of families. Parents need to be united, working as one, toward the common good of their children. Even if divorce has divided the family, parents can still work in unity for their children's sake.

Let's assume you are married, and you and your spouse want the best for your family. Creating unity as a couple will make that happen. With so many differences in personalities and likes, you may wonder how this is possible. At times, it may feel like an unachievable dream. That's simply not true.

A. Decide it's possible

Be a "Dr. Martin Luther King Jr." type of dreamer. We're all familiar with his famous speech, "I have a dream."ť Basically, he was seeking what married couples are seeking - unity and quality of life for all. Have a dream and nurture it. See you and your spouse as "one"ť in purpose. Keep that dream alive in your mind. It will help you focus on achieving it.

B. Be willing to compromise

Recognize that you will have differences. Actually, that's a good thing if you make the most of it. The way to do that is to listen to each other's opinion about an issue. If your spouse's idea is a good one be open to a change of mind. You don't have to always be right. Often there are two rights, both with good outcomes. Settle on one then work together to make it happen. Be willing to give and take. It won't work if one person's ideas always have to be the right ones. Compromise is a key factor in creating unity.

C. Look for the good in each other

This brings to mind a story of a young married couple. The husband said to his wife, "You just don't make bread like my mom."ť She retaliated with "And you don't make dough like my dad."ť Funny as they may seem, comments like this will immediately create a division. Don't hurt each other with insults. Forget about things that really aren't worth discussing. A woman married for nearlyÂ 50 years before her husband passed away was asked what made her marriage so happy. She said, "I decided early on to ignore things that didn't matter. Some things just aren't worth a fight."ť Then she added, "There was just too much good in the man to pay attention to the few faults he had."ť

D. Work as a team

Sometimes things happen in life that throw a monkey wrench into what you envisioned as a happy married life. Every couple will experience bumps in the road. Don't let these bumps cause you to stumble. Hold on and help each other over the bumps.

In a Good Housekeeping Magazine October 2013 article featuring actor Michael J. Fox, he talked about the bumps in his life and the blessing of having a supportive wife. ForÂ 20 of his 25 years of marriage, he has dealt with Parkinson's disease. Together they are raising four children and facing the challenges head-on. When talking about his wife, Tracy, and how supportive she's been through the bumps in their journey, he noted that they've had their moments when it was really tough. Regarding their dealing with these moments he said, "Ninety percent of the time, it's, 'I know you're doing the best you can. And I'm doing the best I can.'" He added, "It's hard, and we don't have to make things any harder just to prove a point or go set one of us up to be the hero. In a happy marriage, there are no heroes. It's gotta be a team all the way."ť

With the kids back in school working on their ABCs, it's a good time for you and your spouse to concentrate on these ABCs in achieving unity in your marriage. Just like the kids, if you are diligent in doing your "homework"ť you cannot help but succeed. You won't even have to wait for a report card. You'll see the results as soon as you begin. Creating unity in your marriage will bless your entire family. 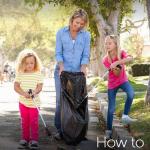 How to Celebrate Clean Up the World Weekend