Are Your In-Laws the Outlaws?

One of the Most Difficult Things in Marriage Can Be Dealing With Your In-Laws. They Have Been Used to Taking Care of Your Spouse in One Way or Another For at Least 18 Years, so They Have a Vested Interest in What Happens With Their Children.

One of the most difficult things in marriage can be dealing with your in-laws. They have been used to taking care of your spouse in one way or another for at least 18 years, so they have a vested interest in what happens with their children. This often leads to them overstepping boundaries and becoming too involved, giving advice where none is wanted and demanding more time and energy than you may want to give. However, we have found that if you deal with these problems deftly you can have a relationship that adds to your marriage rather than detracts from it.

First, discuss how you want to deal with your in-laws with your spouse. You are dealing with their parents and as such, you should discuss things with your spouse first. Sometimes they welcome the more hands-on style that is typical with in-laws or they may want to pull back. Regardless, before doing anything else, make sure you are united in what you would like.

Second, identify flash points. What are things that make your relationship with your in-laws challenging? Is it money? Is it a holiday schedule? Is it them telling you how you should parent? Is it something else altogether? Find out what causes friction between you (the easiest way to identify this is if you feel a fight or flight urge when talking with them about it) and discuss what your family's plan should be.

One of the "flash points" in our relationship with Rachelle's family was the fact that Beau's parents are divorced and both have remarried. With all three families living in close proximity we decided to divide everything equally (holiday rotations, Sunday dinners, etc.) between all three families. As the bride's family, her family felt they should get half and his family should get half. They did NOT like being a "third." It caused a lot of angst for many years and occasionally still pops up. While talking with them one of the things we decided to do was stop Sunday dinners with them altogether because it was causing so much anxiety and to just try to do other things with them throughout the month.

Next, talk with your in-laws. We know it sounds easy, but typically talk is where things break down. Miscommunication can occur in any situation, but when there's no communication, it's even worse. When you talk with them, use some basic rules that will keep the conversation safe. First, don't attack - make things safe for them, and in turn it will be safe for you. Acknowledge your gratitude for what they have done for you. They were a big part in your spouse being who they are and by recognizing that, it will help them to see that you do value them, but you also want to have some space as well.

Don't be adamant in all your demands. Just like imposing unilateral, punitive peace terms with Germany didn't work so well for France and the United Kingdom at the end of World War I, insisting on everything being "your way or nothing" is a sure way to lead to bigger problems down the road. There are some things that may not be negotiable, but make sure that they are the most important things. Above all, listen to their concerns and make sure that you have fully addressed them.

When a situation arises where your trust is breached, talk with them about it. Don't let things fester because as Al Switzler, Kerry Patterson, Joseph Grenny, and Ron McMillan say in their book Crucial Conversations, you will either talk it out or act it out. If you choose to stay silent, you will end up doing things that will negatively impact your relationship with them and will make things worse in the long run.

Be firm but don't be angry. Just because your in-laws are expecting more than you want, don't get angry with them. Instead, be firm in your limits. Tell them "we appreciate your desire to [help, see us more often, etc.]; however, we are doing things this way because we feel that it is best for our family." We know this is easier said than done, but that leads into our final suggestion.

Love them. They have entrusted you with something that is more precious to them than almost anything else. Most of the time they are trying to help you and your spouse and are using their years of wisdom to do so. Sometimes they are wrong, sometimes they overstep their bounds, but all of the time they are working to love you like one of their own and to make sure that you care about their child as much or more than they do.

If all else fails, remember that what goes around comes around. One day you'll be the in-law and your son or daughter-in-law will be reading this trying to figure out the very same things you once did! 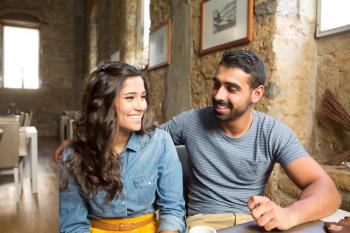 Traversing the Communication Minefield of Marriage