All Along She's Preparing Him for The Other Woman.

It is a proven fact that boys who share a healthy relationship with their mothers from their early childhood are emotionally strong and believed to have fewer behavioral problems in their lives. The strong bond between the mother and son will help boys feel secure and confident. While childhood is a crucial point in every boy’s life, it is just as important for a man to have a healthy relationship with his mother. In many cases the way a man treats his mother, dictates how he will treat his future partner.

All relationships are dependent upon communication – and mother and son relationships are no different. Your Tango says a man’s relationship with his mother will create serious lines and crevices into his personality. A man’s mother is the first person he will have a close and connected relationship with and in many circumstances, she is the person who will shape his values and outlook on the world. Every man and his mother should have continuous conversations about several things because it will ultimately shape the romantic relationships that a man will have in the future.

While every mother and son relationship has different dynamics, here are the general conversations every duo should have:

Men need to be able to move forward without asking for their mother’s approval. While it is perfectly normal to value a mother’s opinion, it is not okay to hold an approval on a pedestal or be dependent upon what someone else says. If a man depends on his mother’s approval for the majority of his major decisions, life will become very predictable and unsatisfying.

A conversation regarding approval would focus on independence and growth. A son could kick things off by saying something like, “I value your opinion, but I want to make sure that I can think independently. I believe in the morals and ethics you raised me on. I need you to always trust that I will make the right decisions.”

Mothers will feel less defeated, in a maternal mindset, if their son is honest but uses a gentle tone. A mother should never dictate her son’s life. A son and mother should always have a growth mindset because it will help steer their relationship in the future.

A man should never be overwhelmed with the intense fear that he will disappoint his mother. If a man is constantly worried about disappointing his mom, he will eventually sneak around and be dishonest on multiple levels.

Every mother and son should discuss the inevitability of disappointing each other. Mistakes are the best way a person can grow as an individual. If we never make errors, we’ll never know how to do anything. If a son makes a mistake, he needs to feel comfortable enough within his parental relationship to go to his mother for advice or just to discuss the situation at hand.

All errors vary in size and there will be times when mistakes are overwhelming, but honest open conversations between a man and his mother will create a solid forum and foundation for a strong bond.

In due time, a man will get into a relationship and if everything works out, he will get married. Genesis 2:24 says, “Therefore a man shall leave his father and mother and hold fast to his wife, and the two shall become one flesh.” The well-known Bible verse is saying that men will need to prioritize their romantic partner over their parents. From time to time, this life transition can be hard on parents – especially mothers. Moreover, moms may feel like they are losing their sons versus seeing it as gaining another family member in the long run.

A son may feel like he is being unfair or defying his mother if he puts someone else above her; however, mothers need to have an ongoing conversation with their sons advising them that it is okay to fall in love and put someone else first. In many cases, people think that this conversation about relationship priority is innate but it’s not. Discussing romantic relationships and addressing paternal ties can be a great way to strengthen bonds between a son and his parents, and his partner.

Parents want to protect their children and if they could put them in a bubble, they might try. It can be difficult for parents to understand the concept of letting go, but the process isn’t necessarily cutting all ties. On the contrary, parents are not actually letting go as much as they are teaching their children how to grow and be independent people.

Communication should be a priority in every relationship. Engaging in continual conversations will create strong bonds and establish a solid foundation that will last the test of time. And ultimately, the parental relationship will create groundwork for future relationships in their child’s life. 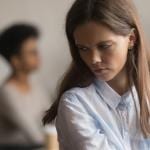 5 Ways to Deal With a Jealous Friend