Do You Know What Fairy Tale Love Looks Like?

My Husband Showed Me What Fairy Tale Love Looks Like and It Isn't What I Expected.

Happily ever after. That's what they say, right? You've found the one to live out all of your days with and your storybook ending awaits.

I was downstairs running on my treadmill late that night. Our two little boys were already asleep in their beds. My husband and I had been fighting on and off for what felt like forever. Life had turned increasingly chaotic with our son's diagnosis, a major skull surgery, another impending surgery, and the seizures that raged on with alarms going off in the middle of the night. I was falling apart at the seams with a load of what if questions and the genuine fear I felt for my son's life.

I was no longer myself. I had become an insomniac. I was spiraling into depression. I was also having what the Doctor diagnosed as panic attacks. Sometimes I was a mess, raw with all kinds of emotions that just overflowed from my very being. Sometimes I was numb, cold, and unfeeling, this person who couldn't even pretend or allow herself to care. It was like watching a stranger act this way. I was embarrassed by this stranger and I wanted her out of my head and out of my life, but she had such a strong hold over me.

My husband stood next to the treadmill as I stared straight ahead, with the steady pounding of my feet to block out all of the things I didn't want to hear. A duffle bag full of his clothes sat at his feet. The silence stretched out between us. Finally, he threw his parting words in my direction "I can't do this with you anymore. I just can't." I didn't even look up. I didn't even flinch. "OK, bye." I said as I continued staring straight ahead of me, running into nothingness. He slammed the door behind him and the sound of my feet started to fade away.

That's where he found me an hour later. He had come back home and I was sitting on the hard treadmill belt, puke still in my hair, and crying hysterically. I was the vision of undone. He picked me up from my treadmill and brought me to the bathroom to help clean me up as I gripped his arm.

We both made a lot of mistakes attempting to navigate this new place in our life. Honestly, I have made the majority of them. It took me much longer to figure it out, to find myself again, and to trust the ground below me was steady enough to hold. It was and still very much is a learning process. I patched myself back up together as best as I could. I sought counseling. I attempted to make peace with all of the things I couldn't control. I found my faith once again. We became a team, united and fighting battles together instead of against one another. We came out the other side even more solid in our marriage, strengthened by the dark road we had traveled.

Maybe that's not what people had in mind when they said happily ever after. Maybe they meant flowers, exotic trips, and eloquent sonnets professing undying love. Maybe Prince Charming never attempted to leave in frustration to his shell of a bride. Maybe that fairy tale princess never threw up all over herself. Maybe that fairy tale life doesn't look anything like ours. Or perhaps happily ever after meant something more, like a promise. Love for better or worse: way, way worse. Someone to hold you up in the halls of a hospital when your legs go weak. Someone to rinse your gross hair out for you. Someone that loves you even when you are sure you are unlovable and undeserving of such love. Someone that refuses to give up on you over and over and over again. Someone that will love you through all seasons. A love like a fairy tale.

Editor's note: This article was originally published on Running Through Shades of Blue. It has been republished here with permission.

Kathy Sebright is a mother, avid long distance runner, writer, and wanderer at heart. Kathy is a contributor for The Huffington Post and can be found here: http://www.huffingtonpost.com/kathy-sebright/. Kathy also rambles about her life as a mother, runner, caregiver, and sometimes overall mess on her own blog.
nextarticle 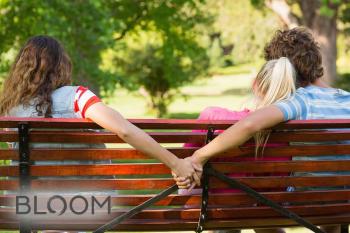 7 Subtle Signs He is Cheating on You