The media is in a frenzy after the co-hosts affair hits the tabloids.

ABC News has taken 'Good Morning America: What You Need to Know' co-hosts, T.J. Holmes and Amy Robach, off the air indefinitely after their extramarital affair was exposed. ABC had initially planned not to remove the anchors from the show, but given the mass amounts of media attention the scandal has gained, ABC News President Kim Godwin told staff during an internal call on Monday that the "internal distraction" has become too significant. "I am going to take Amy and T.J. off the air while we figure this out," Godwin told staffers.

The pair was recently exposed for their secret romance after they were spotted on a romantic getaway together in the Shawangunk Mountain region. Soon after the news began to spread, Kim Godwin said in a statement, "I want to say that while that relationship is not a violation of company policy, I have really taken the last few days to think about and work through what I think is best for the ABC News organization," according to TMZ. "This is something I'm not going to talk, we're not going to talk about on this call until there is more to be said. I'm asking that we stop the whispering in the hallways. You know, we can't operate with gossip, and speculation and rumors. We need to stay focused on the work," she continued. "If you think there is something that management needs to know, you can always call HR or, as we've said, talk to a manager that you trust. If you think there is something that we need to know."

Robach has been married to her husband, former "Melrose Place" star, Andrew Shue for 12 years while Holmes has been married to his wife, attorney Marilee Fiebig, for 12 years as well. It is said that Holmes and Robach began their romance in March, but didn't leave their spouses until August. Robach has been spotted moving out of her NYC apartment that was once shared with her husband and has moved into a different apartment while Holmes and his wife have yet to officially comment on the matter. 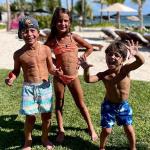