How Can We Best Reach Out and Help Others Who Suffer From Dark Nights of the Mind?

Jamie* accidentally gashed her hand so badly that she not only required stitches, but she had to work with a hand surgeon, so that her hand could heal properly.

Belinda* was in a terrible natural disaster. She was not only afraid for her own life, but she saw others lose theirs as well. While some of her friends in similar situations moved on after a little help, Belinda couldn't seem to get past her nightmares and her deep sense of gloom. Her doctor diagnosed her with depression. Belinda would need to work with a therapist and take medication in order to heal her emotional injury.

Would you judge Belinda more negatively than Jamie, because she had an emotional injury, rather than a physical one? Realize that damaged hearts are the same as damaged hands.

If you answered honestly and agreed that you would view Belinda more negatively, you're not alone. Even in today's more enlightened society, there still exists a certain stigma for people afflicted with mental health issues.

People who suffer from mental health problems, too often, also suffer from discrimination and social rejection. In fact, some of them even avoid or delay seeking help, because dealing with the stigma that goes along with seeking help is far too difficult to manage. Many of us have a hard time seeing mental health injuries as being equivalent to physical ones. This can cause us to mistreat situations involving family or friends with mental illness.

Why are these negative attitudes toward people with mental health issues so prevalent? Recent research from Bodenhausen (et al), as reported in Kellogg Insight suggests a relationship between mental illness stigma and commonly held world views that stress personal responsibility.

Using questionnaires and tests that measure automatic reactions, Bodenhausen found that people with beliefs that self-reliance and hard work are the keys to success showed a greater tendency to blame people with mental illness for their disease. These stigmatizing attitudes "represent a barrier to treatment-seeking," Bodenhausen reported.

There's certainly nothing inherently wrong with valuing self-reliance and a positive attitude. Unless, we over utilize that belief by judging others who are suffering from debilitating mental and emotional conditions. Instead, we can help others get better by showing them empathy and compassion, rather than stigmatizing them and passing judgment.

The Apostle Peter wrote that disciples of Jesus Christ are to have "compassion one of another." This means showing the same compassion to people with emotional injuries that we show to people with physical injuries. As family members, we can help others by being kind, merciful and non-judgmental and by seeking to understand their suffering. Just as it would not prove helpful to tell someone with a broken leg to "just get over it," it does not help someone suffering from depression to tell him to just buck up.

Jeffrey R Holland, educator and religious leader said, "...these afflictions are some of the realities of mortal life, and there should be no more shame in acknowledging them than in acknowledging a battle with high blood pressure or the sudden appearance of a malignant tumor." Holland suffered his own "psychic blow that was as unanticipated as it was real." Other great men such as Abraham Lincoln and Winston Churchill also battled recurring depression. Intelligent, hard-working, and kind people suffer with mental illness.

Be part of the solution

We can be part of the solution instead of part of the problem. Rather than criticizing from the sidelines, we can jump in with love and encouragement both for those who suffer and for those who care for sufferers.

We can help friends and family with mental illness by letting them know they are loved, by encouraging them to seek professional help where appropriate, by never giving up on them, and by treating them with the same compassion we would show to anyone else. We can also help by treating them normally and by not avoiding them or offering them our own advice on a topic we understand little about. We can provide them with assurances that change will come and life will eventually get better.

Let us love others by reaching out equally to heal both broken hands and hearts. 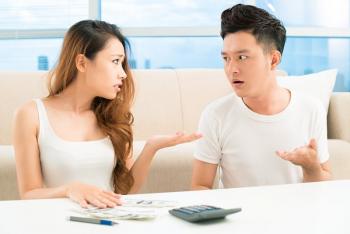 Why It's Hard to Talk About Money in…