Let's get caught up on why this interview and her change of heart is even newsworthy. A few years ago, Jones very publicly called out the entertainment industry for its "pornification of everything" that's ultimately harming our girls.

In a December 2013 article in Glamour, Jones questioned why pop stars and others always seemed to be getting naked and the "pornification of everything."

"Every star interprets 'sexy' the same way: lots of skin, lots of licking of teeth, lots of bending over," Jones wrote. "I find this oddly...boring. Can't I just like a song without having to take an ultrasound tour of some pop star's privates?"

Jones pointed out how an abundance of sexy visuals in popular culture make it harder for us to raise strong, confident daughters.

"What else ties these pop stars together besides, perhaps, their entangled G-strings?" she wrote. "Their millions of teen-girl fans. Even if adult Miley and Nicki have ownership of their bodies, do the girls imitating them have the same agency? Where do we draw the line between teaching them freedom of sexual expression and pride in who they are on the inside?"

Thanks to Jones, we get another chance to talk about this intimate subject. Here are four reasons that should get us thinking - and talking - about what's really going on when we're stimulated by what's on the screen.

Even in causal use, pornography acclimates the viewer to a distorted sense of reality: that this is how sex should be, at any time, with any one. Those faulty expectations make it easy to lose sight of the real reasons for sex, like deep connection with another person.

In an article in The Huffington Post, Jane Randel (co-founder of NO MORE, an organization dedicated to finding solutions to domestic violence) and Amy Sánchez (CEO of Break the Cycle, which empowers youth to end domestic violence) wrote:

It's hard enough to stop your snuggly newborn from growing out of footed PJs, but there's no way to install enough internet security measures to prevent a 9-year-old from stumbling across sexually suggestive images online.

Couples should be talking about realistic expectations of intimacy and ways to build real connections.

Parents should be looking for age-appropriate (and non-awkward) ways to talk with their kids about sex. Sites like EducateEmpowerKids.org provide great resources and conversation starters for parents.

Emily Hellewell is the managing editor of FamilyShare. She previously worked for NPR, Brigham Young University and for the Alexandria, Virginia Visitor's Association. She is currently pursuing an MBA from BYU.
nextarticle 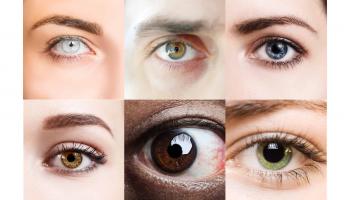 Quiz: What Does Your Eye Color Reveal About…