How to Deal With a Different Crazy: Mother-In-Laws

My Mother-In-Law Isn't Horrible, She's Just Different Than What I Was Raised With and What I Am Used To. It's Time to Learn How to Adapt to a Different Crazy.

I was talking to my newly married brother the other day and we were discussing mother-in-laws. After going on a cross country drive with his, he had discovered that she wasn't exactly the person he had at first thought that she was. He said something that to me hit the nail on the head as far as MILs are concerned. He said, "She's just a different crazy than I'm used to."

He's exactly right. It's not that our MILs are horrible while our own mothers are perfect. It's just that they're different. So how do we adapt to a different crazy? The following are some of the issues I have faced with my own MIL.

It's trite I know, but it's true. My family is an open book, maybe too open. My in-laws book isn't just closed, it's hidden. I have written letters to my MIL to communicate feelings, both bad and good. Although nothing changes, she has always been gracious and I've discovered that it helps me not to keep negative feelings bottled up. We probably aren't going to change, but it still doesn't ever hurt to explain who we are and why we do the things we do. A little bit of understanding goes a long way.

What do I call you?

I still remember the phone ringing once during a family dinner. My brother-in-law was closest to it, so he answered it. It was for my Mom. He stood there awkwardly holding the phone out in front of him not saying anything. Since there were about 20 of us in the room none of us knew who it was for. Finally he blurted out, "The phone's for you, Mom ... Connie ... Sister Rose ... Mrs. Rose."

We thought it was hysterical and even more so when my Mom got a weird look on her face. "I'm not your Mom."

This was a far cry from my own MIL who would love for me to call her "Mom." I'm not comfortable calling her that, not because she isn't wonderful or that I don't love her, but simply because I already have a mom. That title is pretty sacred. It's not just a name. It's something that's earned. My Mom has earned it, just like my MIL has with her own kids. As much as some families try to act like everyone is equal and there aren't "in-laws," it's not true. Otherwise we wouldn't use the name "in-law." It's a fact, not a criticism. But being an in-law doesn't have to mean that you're a "less than." I certainly don't expect my mother-in-law to feel the same way about me as she does her own daughters. That doesn't, nor should it, offend me. We can still have a great relationship without forcing it to be more than it needs to be.

How many times have we had the same arguments over and over again with our loved ones? This is because we all have faults and usually these arguments center on our faults. Change is hard, but maybe acceptance is easier. For years there have been things that have driven me crazy about my MIL and I'm sure she feels the same about me. I've discovered something. The more I try to get things to change, the more frustrated I become. I had an epiphany the other day. It was that I wasn't being fair to my MIL. My Mom is a very strong and independent woman. I realized that I was expecting my MIL to handle things the way my own mother does and I was becoming upset when she didn't. I didn't even realize I was doing this. I was viewing my MIL as weak and was losing respect for her because of it - something that was very unfair.

My mom raised us to be tough and very independent. She encourages her children and their spouses to rely on each other and not their parents. My MIL on the other hand would love if we lived with her, sat right by each other all day long on the couch and hugged and kissed each other frequently. Which brings me to the next point.

The first time my husband's family was all together we all hugged hello and then hugged again good-bye. I wondered if someone had died. Why else would we be hugging? We live within a mile of each other and see each other all the time. I finally explained to the in-laws that just because I'm not a huggy person doesn't mean I don't like you. It's simply not how I was raised. In a weird way I realized that I resented hugging and kissing my MIL because I don't even act that way with my own mother, who I'm very close to. It felt false to me. What I realized was that it wasn't false on her part. That was how she showed love and that's OK. It's also OK for me not to initiate something I'm not comfortable with. We tend to expect people to react the way we want them to and when they don't we think something is wrong with them.

Don't get offended on the small things. Save it for the big ones

If your MIL invites her daughters to lunch or shopping and doesn't invite the daughter- in-laws, before you get offended ask yourself if you'd invite your MIL to lunch with you and your sisters or your mom. Probably not. Just because she still wants to do some things with just her daughters doesn't mean she hates you. If it's not a big deal, don't make it one. Also if your MIL wants to do a family portrait and wants the photographer to take one picture of the original family without in-laws, that's fine. Get over it. However if that's the only picture she wants to take, that's not OK. Your kids chose to marry their spouses. It wasn't your choice, but it shouldn't have been. Do not exclude them from a family picture since they are now part of the family whether you like it or not.

"If you can't say anything nice"""

Yes, she has faults, but it doesn't make her an outlaw. I know I have them too. She's a mother and probably has had them pointed out to her her whole life either by her kids, a spouse or herself. Just like I have. I want a break sometimes so why can't I give her one? I know that one day I will face these same issues with my own daughters-in-law and that knowledge tends to give me the perspective I need to be a little kinder. At the very least, it may make it a little easier to let my sons go when they get married one day. 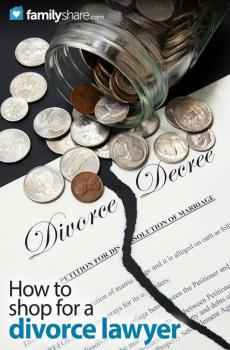 How to Shop For a Divorce Lawyer