How to Fix the Fights You’re Sick of Having

Learn How to Break Bad Patterns and Stop the Madness.

Has it ever felt like you’ve had an argument for the 167th time? It could be an argument with your spouse, your child, or even a sibling or parent. Though the “flavor” for the argument may change depending on the day, the underlying issues are often the same from one argument to the next.

The feeling is awful. It’s a mix of frustration, anger, and resentment. Often the argument is accompanied by a feeling of hopelessness and a sense of helplessness – a feeling of being trapped. It can feel like being knee deep in quicksand, where everything you do to get out only makes things worse.

I recently told the story of a mother and daughter who were sucked into one of these arguments over a seemingly simple behavior on the mom’s part to try and do what she thought was best. Watch the story here and see if you can relate.

Can you see how this independent-natured daughter was not really fighting with her mom? Nor was she simply upset about the fact that her mom had gone against her wishes by not letting her get her own horse.

No, she was angry because once again, her mom had disregarded her request and done what she (the mom) felt was best.

In that light, you can more fully appreciate why the daughter would give up riding horses and instead walk home by herself. It was her way of protesting the long-standing pattern of feeling like her boundaries were not being respected.

Before you come down too hard on the mom, consider the pattern that she was fighting, albeit in a calmer, less aggressive manner.

You might remember that the mom had nicely requested that her daughter try for a minute longer to get her horse before going across the field to get hay. The mom knew there was a good chance the daughter’s horse would come now that her horse had been reigned in. But her daughter wanted to do things her own way, and without her mom’s help.

Can you see the pattern mom was fighting?

No doubt this wasn’t the first time (or the second, or the hundredth time) that her daughter had resisted one of her reasonable requests. As you can imagine, it’s highly likely that her frustration with her daughter’s stubborn, independent nature made it easier for the mom to justify getting her daughter’s horse despite being asked not to do so.

Knowing When You Are Fighting a Pattern

When we fight with a pattern, our primary goal is to stop the pattern from happening again. We are so tired of it that we will sometimes do or say anything to try and get it to stop. As a result, we often turn into someone completely different in these arguments, someone we aren’t so proud of.

Thankfully, there’s a way out. And it starts with understanding a simple concept you’ve probably never thought about before – “The problem isn’t the problem. Rather, the problem is our solution to the problem.”

Think of it this way. As the pattern becomes more entrenched, our efforts to stop it become more intense, more desperate. As a result, what we do to try and solve the problem has actually become an even bigger problem.

What’s worse is that our efforts to stop the pattern from happening again actually make it more likely that the pattern will continue.

In short, the more we fight the pattern, the worse it gets. So, what are you supposed to do instead?

Unfortunately, there’s no silver bullet for this one. It’s simply not possible to break a pattern that may have been going on for years just by doing one or two simple things. That said, I’d like to offer two simple suggestions that should help you weaken the pattern and get moving in the right direction.

The first suggestion is the simplest and yet maybe the hardest. Next time you find yourself in a familiar argument, imagine yourself in a tug-o-war with the person. Then, simply “drop the rope.” That may mean any number of things depending on how you typically choose to fight the pattern. For example, it might mean not trying to convince the person or your perspective. It could involve relaxing your muscles and taking a few deep breathes. It could involve changing your thoughts from “This is never going to end” to “I’m choosing not to fight this pattern today.”

“What’s Most Important to You”

The second suggestion is to invite the other person to try and identify the pattern they are fighting. You can do this with any number of questions, but here’s one you might consider.

“Help me understand what is most important to you in all of this?”

This might be easy for them to answer. In the horse story, the daughter might have said, “The fact that you never respect my wishes.” If so, try to ignore the “never” part and instead simply acknowledge that “there’s truth to that.” Ideally, apologize and let them know you intend to work on that. Invite them to nicely point out when it happens again so you can be more aware of that pattern. Doing this will help them also “drop the rope.”

At other times, the other person may have a difficult time answering your question. They may continue to focus on the details of the present argument. For example, thinking again about the horse story, the daughter might say, “Isn’t it obvious? I wanted to get my own horse. I told you not to and you did it anyway!”

If so, see if you can translate what the other person says into the language of the pattern. For example, the mom could respond to her daughter’s comments by saying, “So what’s most important to you is that I not ignore your requests?” If the mom really wants to confirm whether this is the pattern the daughter is fighting, she could ask, “Is this something you believe I do a lot?”

The Rest of the Story

The suggestions above will help reveal the pattern with which the other person is fighting, but it won’t unveil the pattern with which you are fighting. You’ll need to think about that yourself. Simply ask yourself the same question you asked the other person. “What is it that is most important to you in all of this?” If the answer jumps out at you right away, you could consider sharing it with them in that same conversation. On the other hand, maybe it’s a conversation for another day. You’ll have to decide.

Either way, you’ve taken some big steps to freeing yourself from fighting with a pattern. Plus, while the pattern will work to pull you back in, your ability to “drop the rope” and discover “what’s most important” will no doubt lessen the power that pattern has over you.

Bryan Zitzman, AKA “Dr. Z,” brings to the table the valuable combination of being educated, experienced, and personable. He received his Master’s in Marriage and Family Therapy from Brigham Young University and his Doctorate in Human Development from Virginia Tech. Dr. Z is a Licensed Marriage and Family Therapist and the Director of Content and Services at Radiant.
nextarticle 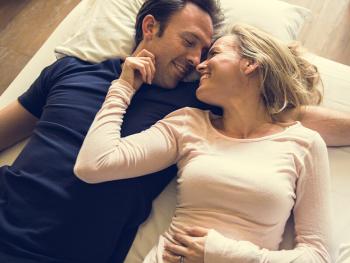 The Most Powerful Way a Husband Can Say…