How to Get Your Mojo Back

One Strategy to Rebuild and Regain Your Mojo is to Reconnect With the Person You Were Before the Marriage.

It's never easy to get to the point of making that big decision in a marriage to part ways. It takes a lot of thought and introspection to get to the point where one party files - so the same should be true of decisions made during the divorce process.

We evolve as a person during a divorce, so rushing into decisions without the benefit of that full evolutionary process may create obligations or realities that result in a lot of unhappiness in our future.

Think about it: if you're alone for the first time in a while, you will likely experience many things: fear, sexuality, depression, anger, paralysis, confusion, sadness, excitement, frustration, insecurity and inadequacy - and not necessarily in that order. Would you want someone to make a significant life changing decision for you if they were in a state like that?

Give yourself plenty of time

If you're caught up in the throes of the process or just emerging from the process, the first rule of thumb is: don't make any significant life changing decisions for at least six months or more after divorce.

If you have to make a decision, consider the options carefully and consult professionals for advice. Do not consult angry, bitter or cynical friends who have made their own mistakes and now want you to join their pity party. Do not consult your new romantic interest who may pressure you to fill that void for them - with little regard to what's best for you or your children.

If someone is pressuring you, it's probably because they know what they want isn't necessarily in your best interest.

Don't read too much into a new romance

Further, a new romantic interest probably looks better simply because you likely had no physicality in your relationship for a long time. Practically speaking, most anyone can look exciting after you've been with one person for so many years. Don't let that high convert into a series of poor decisions because the first person who crosses your path smiles at you.

Don't read too much into a lack of new romance

Conversely, if no one is smiling at you, don't take it personally. It's temporary. They are just feeling what you're subconsciously projecting: the anxiety, panic, confusion and all the other emotions that signal them to stay away. From my observations over the years, I find that it takes about two years from the finalization of the divorce for one to become whole again. When I say whole, I mean making good judgments, asking for what you deserve, regaining your self-confidence and focusing on the things that are important.

Mojo is an overused term, but it really does reflect a situation many divorcing people go through when they feel defeated by the divorce process and are feeling the repercussions and perception of a failed marriage. Marriages don't fail - they just don't always continue. You were married. It was a success. But at some point it changed and when it was no longer a successful marriage (based on each individual's definition of successful, which is largely one's expectations), one party or both ended it.

Some people run a business which is very successful for years. Then, at a certain point, the business model changes or consumer behavior changes and their business is no longer bringing the revenue that it once brought. Closing the business and starting something new or retiring at that point does not make the entire 30 years of business a failure. It's a change. And once you stop thinking of a divorce in terms of winning or losing and start thinking of it as changing and growing, you will be able to start the important process of rebuilding your life.

Reconnect with your past self

One strategy to rebuild and regain your Mojo is to reconnect with the person you were before the marriage. Did you have friends who thought you were great? Did you have a teacher who viewed your future as the brightest in the class? Do you have a special talent or hobby with great promise that you gave up for the marriage?

I remember a turning point for regaining my self-confidence. An investor conducted interviews on my background. He spoke with people who worked for me, to those I worked for and those I worked with - some I hadn't seen or talked to in over 25 years. When he sat me down to give me the overwhelmingly positive feedback it brought tears to my eyes. They reminded me of who I was. I also realized just how far I was negatively influenced by one person's opinion, an opinion that was clearly not shared by others.

Turning points are critical building blocks to regain self-confidence, individual identity and purpose which was there but forgotten over time. So find your turning point, allow the information to sink in, resurrect your Mojo and THEN make decisions. You'll be making them from a place of conviction and strength and they will be life decisions that truly reflect who you are.

Michele Colucci, JD, is a lawyer, entrepreneur, CEO of MyLawsuit.com and divorced mother of four. She is a regular contributor for The Huffington Post, eLocal, HopeAfterDivorce.org and FamilyShare.com. Follow Michele on Twitter @MyLawsuit.com.
nextarticle 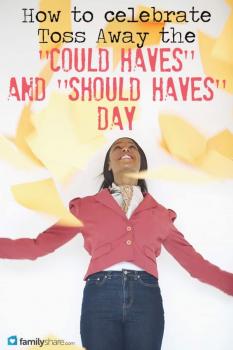 How to Celebrate Toss Away the 'could Haves'…