How to help others change by looking on the heart

How to see our husbands and children for who they really are.

God looks on the heart. He sees us with all of our flaws and imperfections and loves us still. This is an amazing gift for those who believe. This simple act of love and acceptance can improve the quality of our lives and help us become better people.

Do we do the same for our husbands and children? What about for our friends and members of our church communities? Do we look on their hearts and see their divine potential, just as God sees ours? Or are we sometimes critical instead, perhaps even believing that we can shame others into improvement?

Bethany (names changed) teaches a weekly singing class at her church to children ages 3-12. Generally the children love singing the songs. Not Josh. Josh thought all the songs Bethany selected to sing were "dumb." Josh is a leader among boys his age, and his attitude was quickly spreading to the others.

Bethany racked her brain for ideas to get Josh to cooperate. Then she remembered reading somewhere that the best way to change behavior is to catch people doing something good, and then praise them for it. So she waited and watched until one day there was a moment when Josh was singing without complaint. Bethany stopped what she was doing and praised Josh. Next she invited him to come forward and be her singing assistant for the day.

Josh just beamed. He loved being singled out for good behavior, rather than being criticized for negative behavior. He enthusiastically helped everyone else learn the new song. Now Josh is Bethany's best helper. He sits smiling on the edge of his seat each week, waiting for singing time to start.

Instead of seeing Josh for who he appeared to be, Bethany tried to see him for who he could become instead. Her kind words of encouragement allowed Josh to change his behavior. She believed he could change. That made the difference.

Ben grew up in a small town. The other kids made fun of him, calling him names such as nerd and weirdo, making his life pretty miserable. Ben believed them. He soon came to see himself the way they saw him - destined to fail.

Eventually, he grew up and moved away. Ben joined the military and found success. He completed his education. He was a new man. He moved back to his old community. Those he had left behind couldn't see him for the man he'd become. They couldn't look on his heart. They could only see the old Ben they'd always known - the weirdo, the nerd. Soon Ben believed them again.

While Josh found someone in Bethany who believed that he could change, who looked at him and saw his heart, his divine potential, Ben did not. It didn't take long before Ben fell back into his old ways, becoming who he once was, not who he had worked so hard to become.

Seeing others for who they can become

In our marriages and families, and even in our churches, do we tend to be like Bethany or like the folks in Ben's community? Do we look on the hearts of those around us, as God looks on ours? Do we see not who they are, but who they can become?

Choose to be a Bethany. Look on the hearts of those around you. Don't label those you love or constantly dig up past mistakes. Encourage people to grow. Believe that they can change.

The repentance process is all about becoming new creatures. When God forgives others and embraces their changes, can we do any less? When those we love gather round us and support our positive changes, it not only becomes possible for us to change. It becomes more likely that we will maintain that change.

I had family, friends, and a community of faith who did that for me. Won't you please do the same for those you love? The results may surprise you. 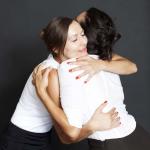 Finding Peace in Family Life Through a Broken…