How to Make Your Wife Want to Divorce You

Husbands, This Tongue-And-Cheek Article Offers You Tips on How to Drive Your Wives Away and Make Them Want to Divorce You. Learn What to Avoid.

Creating tension and pushing your wife away, all the way to divorce court, takes less work than you might think. Although sometimes it seems that some husbands put a great deal of effort into driving a wedge, I don't believe that many men are that calculated.

For those husbands who are anxious to have their wife begging for a divorce here are a few simple things that will have her filing by the end of the week.

If you really want to know how to make your wife want to divorce you, start out by watching the 1944 film starring Ingrid Bergman and Charles Boyer, Gaslight. For those of you who haven't seen it, here's what you need to know for now, Boyer marries Bergman and moves into the home where her aunt, a wealthy opera singer, was murdered years before. And in order to protect a secret and get his hands on some of her aunt's jewels, he makes his wife feel like she's going insane.

That is key number one. Make your wife feel like she's losing her mind, overwhelm her and stress her out as much as possible. In the film, Boyer hides things, moves things around in the house, makes suspicious noises from another room, etc. Now, you don't necessarily need to do those things, although that would add a nice touch, but if you simply dump all the household and family responsibilities on her shoulders and never lift a finger to help that will have her aching to be committed by the end of the day.

It's real simple, just come home, in the middle of the day and say, "Honey, I'm not going to work anymore, I just don't feel like it." Then plop down on the couch and turn on the TV. This method was one of my ex-husband's favorite, and it worked well for him.

You can also lie to your wife, especially if she is an at-home wife/mother. You can just tell her you are going to work and then go to the movies instead, or go buy new tools you won't use, either way spend money that you don't have, that part is really important.

With your new found time, since you don't work anymore, you could always fill that space with another woman. But keep in mind, you can have just as much success without adding the complication of another woman's emotions. But should you decide to enjoy the company of another woman, be sure that she is younger, thinner and more beautiful than your wife. And be sure that you remind her of that fact often. You could even cheat on her with a man, that would really cause her to think about divorce.

Those are the basics. Just remember, if you want make your wife want to divorce you, she needs to feel unloved, overwhelmed and unappreciated. There are always additional ways to push her over the edge, and those are always helpful with driving the nail into coffin, but if you're crunched for time and don't want to spend that much energy, just keep it simple, neglect her and treat her poorly.

Andrea has a degree in communications, with an emphasis in journalism.  She also teaches a high school journalism course. Andrea has three little girls, who are her life, and the reason she does everything!
nextarticle 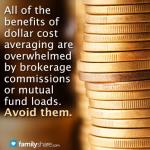 How Does 'dollar Cost Averaging' Work to Improve…