How to save your marriage during an argument

Lots of Researchers and Experts Agree Too Much Arguing Can Hurt Your Relationship. Here's One Big Way It Can Help.

Here's a piece of relationship advice you rarely hear: get in an argument with your spouse.

But only do it if you're going to make your partner feel understood, according to a new study from researchers at the University of California.

That's because feeling understood by a partner can improve a relationship, which makes arguments, though sometimes harmful, helpful for a relationship, The Independent reported.

"Evidence [...] suggests that feeling understood during conflict may buffer against reduced relationship satisfaction, in part because it strengthens the relationship and signals one's partner is invested," the study's authors Amie Gordon and Serena Chen told The Independent.

To find this, researchers had participants in their 20s and 30s who were in relationships that were at least six months long report their relationship satisfaction. Those who argued often with their partner reported lower satisfaction, except in cases where they felt their partner understood them, The Independent reported.

Participants also rated their relationships higher when they felt understood after a conflict took place, The Independent reported.

"The authors of the study said each partner might feel like the other was more invested in the relationship when they made an effort to understand," according to The Independent.

Having arguments or conflicts allows couples to communicate, which is a building block of a happy marriage or relationship, according to a study earlier this year from Cornell University. The study, which included interviews with 400 elderly Americans who had been with their partners for 30, 40 or 50 years and were asked what made their relationships successful, found learning to communicate was essential for many partners.

"For a good marriage, the elders overwhelmingly tell us to 'talk, talk, talk,'" according to ScienceDaily. "They believe most marital problems can be solved through open communication, and conversely many whose marriages dissolved blamed lack of communication."

But when couples don't communicate in a calm way, the relationship can fall apart. Researchers from the University of Michigan back in 2010 found that handling relationship conflicts in ways that weren't constructive often led to higher divorce rates.

For example, partners were more likely to get divorced when they withdrew from each other or used "destructive strategies," like threatening their relationship, in their arguments, the study said.

"Spouses who deal with conflicts constructively may view their partners' habit of withdrawing as a lack of investment in the relationship rather than an attempt to cool down," University of Michigan researcher Kira Birditt said, according to Science Daily.

To avoid those ugly arguments and destructive behaviors, couples should talk about their feelings before getting angry and be careful not to raise their voices, Barton Goldsmith, Ph.D., wrote for Psychology Today.

Partners would also do well not to threaten their relationship since it makes partners panic and act defensive, which can inspire more anger, Goldsmith wrote.

Goldsmith recommends couples come up with their own specific system for resolving their issues.

"Start by each of you taking five minutes to state your feelings, then take a 20-minute break to think about things and come back to the table for another 10 minutes to discuss how you think you can best deal with the problem," Goldsmith wrote. "Also, know that it's okay if the problem doesn't get solved right away."

James Cordova, director of the Center for Couples and Family Research at Clark University, told The Wall Street Journal that these reviews can save your relationship.

"If you are doing it well," Cordova said, "you can tell because you will feel closer to each other and will each feel understood." 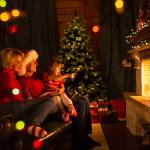 5 Ways to Slow Down and Enjoy Christmas…