Is sex necessary for a happy marriage?

As a marriage counselor, I see a lot of couples who come to me with sexual problems in their relationship. The stories that couples tell me about their sexual difficulties vary, but most of them go something like this: He wants more sex and she doesn't. He says he needs sex to feel close and she doesn't see why her snuggling, cuddling and stuff she does around the house doesn't do it for him. She says she needs to feel close first to have sex and he doesn't see why sex doesn't help her to feel close.

At the end of the day, she doesn't see why sex is so important to him, anyway. There are so many other things they do together as a couple that makes their relationship great that sex shouldn't be as much of a priority. But after a while, she begins to wonder if there's something wrong with her for not wanting sex and he also begins to wonder if something's wrong with him for wanting sex as much as he does. So the couple goes on like this, both wondering if something is wrong with them or the other one, and they grow more and more frustrated and distant. So it's no wonder that many couples, and women especially, wonder if sex really is necessary for a happy marriage because it seems to just cause more problems. If he could just learn to do without, the problem would be solved. (You can read another great article with 6 tips for talking to your husband about sex.)

Sex is vitally important in marriage

Not only does sex set you and your spouse apart from simply being roommates, it also requires a deeper level of communication that you don't normally do with just anyone. Sex requires you to talk to each other about intimate, emotional things. For example, to have a truly intimate experience with your spouse, you need to tell your spouse where you like to be touched, and make requests for certain things. This requires that you both feel a comfort level with each other that you've never felt with anyone else before. It requires you to both become very vulnerable by asking, receiving and giving sexually. And it requires you to reach a deeper level of trust that your spouse will respond to your requests without judgment.

The 10 Commandments of A Happy Marriage

To be able to talk to your spouse in this kind of vulnerable, intimate way creates a unique connection that you simply can't have with anyone else without becoming sexual. This kind of intimate talk and physical touch creates passion in your relationship, too. It tells your spouse you think of him or her as more than just a friend. You think of your relationship as something deeper. This unique connection that lovers have creates vibrance, passion and romance between the two of you that you can't create in any way other than sexually.

When couples come to me for counseling about their sexual difficulties, they're sometimes surprised that I don't focus on technique or the number of times that they engage in sex in a week. Whether they have sex two times a week or 10 times a week is irrelevant. What's more important is that sex becomes an intimate and connecting experience for both of them. If this isn't happening, then the marriage isn't really happy. So instead of couples arguing about sex and creating more distance, couples need to learn to really talk and communicate about sex. They also need to be open to hearing what their spouse wants, feels and needs. This is not only a recipe for great sex but a great marriage as well. 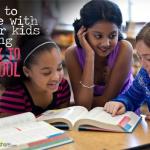 How to Cope With Your Kids Going Back…