Is trust lost? Take the first step to finding it again

Rebuilding Trust in a Marriage May Be Difficult But Not Impossible. Here Are Some Tips to Help You Through the Process.

Trust is the foundation upon which a lasting and joyful marriage is built. Trust is not automatic. It has to be earned. The way we treat our spouse will show the degree at which he or she can trust us. When a couple marries, they start out trusting each other. This trust was gained through a time of dating and courtship. It meant you could count on your sweetheart to do what was promised. If your intended often failed to do what you expected, then the trust would have been violated early on and you likely never would have married him or her. If you married that person anyway, then you know what to expect.

It's like the story of the hiker who picked up a snake who wanted a lift, promising he would not bite him. At some point along the way, the snake bit the hiker. When asked how come, the snake said, "You knew what I was when you picked me up."

But what if you did trust your mate who had proven worthy of that trust, then later violates that trust? What then? Because trust is vital for a marriage relationship to be happy and lasting let's explore what that means and what can be done to restore trust.

Webster's dictionary defines trust as "a firm belief or confidence in the honesty, integrity, reliability of another person." It simply means you can believe what your mate says. You can rely on it.

Here are a few ways marital trust is violated

This includes an all out affair, which is one of the greatest betrayals in a marriage. Infidelity can also include acts that seem less harmful - flirting, going to lunch with a co-worker of the opposite sex, texting intimate messages with others, to name a few. All of these are forms of infidelity and violate marital trust.

Therapist John Townsend said, "One couple I counseled experienced a crisis of trust that could have torn their marriage apart. The husband flirted with other women: waitresses, co-workers, even their mutual friends. He thought it was harmless until his wife told him how alone and scared it made her feel. He saw how it was affecting her, and he was a changed man."

"He told her, 'If you see me being inappropriate with a woman again, tell me right there and I will stop.' He became more accountable, and she was finally able to trust her husband."

If a spouse abuses you physically or emotionally, that is a violation of marital trust. A mate must feel safe with one's spouse. Shelly reported that her husband was calling her terrible names and demeaning her with his insults. She finally set the boundaries and stuck to it. She would not allow him to speak to her in that manner. She said, "Do not speak to me like that ever again," and then she would walk out of the room."

By sticking firmly to her boundaries, he realized she meant it and he changed. Now he treats her with respect, and their love has grown into a beautiful relationship.

There is never a reason to mistreat a spouse or to accept that mistreatment. If you are ever in danger, you need to call the police and make sure you are safe.

It's almost impossible to trust someone who lies to you. If your wife said she was going one place and it was a cover up for going somewhere you may not approve of, that will damage the trust you have in her. If your husband lies about how much money he earns or hides that he lost his job, you soon learn he cannot be trusted. Lying has no place in marriage. Honesty has to be the foundation. A violation of this will easily destroy marriage. However, with work the trust can be restored.

Here are the two steps needed to regain trust

The person who has violated the trust must live trustworthy, which means their life has to be transparent. Marriage is built on openness with no need to hide anything from your spouse. That includes bank accounts, social media, medical information and where you are going.

The person whose trust was violated must be willing to risk giving trust. It's not easy at first, but vital. Trust is never restored without a risk. Be forgiving and give your spouse that chance to be trusted again. At first it requires a leap of faith - faith that your spouse can now be trusted.

Kyle, who is going through the process of rebuilding trust in his marriage, gave this counsel on his blog. "When you realize that talk is cheap, you must resort to demonstrating your love and commitment through action."

"Actions elegantly and clearly express your heart. By their very nature, they cannot lie. Sacrificial love can be demonstrated daily. Honor can be given through your actions. Day by day and week by week trust can be rebuilt through acts of love, honor and sacrifice. In time, words can once again regain power. But that must be earned."

Lastly, don't forget to ask for a little divine intervention. Prayer can help forgiveness happen and repentance to take place. Working at restoring trust can bring you together and create an even stronger marriage. 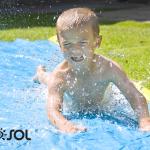