Just a Spoonful of Sugar Helps the Divorce Rate Go Down

Holding Hands and Giving One Another Hugs Can Do More For a Marriage Than You May Realize.

I walked out to the waiting room the other night to witness a somewhat rare event in my practice: a couple holding hands! I immediately felt just a little " happier? More hopeful? Less burdened? I'm not quite sure, but the gesture sent a non-verbal message that things were good, at least for that moment. As an observer, it just made me feel better.

With the preponderance of sexual messages surrounding us, it is unfortunate that we don't learn more about healthy, non-sexual, affectionate touch; it is such a powerful form of connection, yet so often underutilized, often because couples just get busy with competing demands and drift apart. Sometimes I think if we understood the power of warm, affectionate, non-sexual touch, we would promote its expression as readily as physical exercise, and its benefits might mitigate many common marital challenges.

On many occasions, when partners are distressed and I have asked them what they thought they needed in such circumstances, they have replied, "just a hug." If the other partner responds in kind, the couple leaves the session feeling more bonded and connected. Every time.

Recent research around human touch is demonstrating that safe, warm touch in a close, pair-bonded relationship like marriage has particular health advantages and is actually influenced by the quality of the relationship.

In one study, women were exposed to pain stimuli alone and when their partners took their hands, if they were in happy relationships, the hand-holding decreased their stress responses in the brain as measured on an fMRI. The effect was drug-like. In another study, married couples were taught to engage in warm, supportive touch, and the activity had beneficial effects on physiological responses like blood pressure and stress hormones. Some researchers speculate that this kind of touch in marriage has advantages over being massaged by a stranger, because there is some evidence showing, for example, that the benefits of oxytocin only increase significantly when the touch is repetitive over a period of days, as with a secure attachment partner.

Bottom line: there is something uniquely beneficial about warm, supportive touch in the context of a stable, high quality marital relationship. For couples who have high quality relationships and don't take the time to hold hands, hug or generally express physical affection, this seems like wasted marital capital.

Most importantly, I'm going to propose that perhaps the greatest beneficiaries of a couple's consistent engagement in warm, supportive touch are not the couple themselves, but their kids.

Couples who hold hands, hug and touch in a warm supportive way model positive behaviors, and convey a sense that things are going well in the marriage and family. Children are absolutely affected by their parents' marital quality. They garner a felt sense of security from parents who display marital happiness.

Remember how I said when I saw the couple in the waiting room holding hands, I just felt better? I'm not even related to those people. Can you imagine the impact viewing that behavior would have on the couple's children? To demonstrate this point when I make presentations, I will show audiences pictures of marital couples seemingly getting along, and seemingly arguing, and ask them to just yell out their their emotional responses. It's an easy way to see how much we are influenced by these displays.

"Get a room!" has become and oft-repeated cliché by my children whenever my husband and I display any kind of physical affection in front of them. If I didn't have a lot of confidence in those moments, I might be tempted to withdraw. However, knowing what I know, I shoot back with, "I'm contributing to your mental well-being, so you should be thanking me."

Then, they say something like, "Stop talking to me like a therapist," and walk out ... but then at least we are alone. 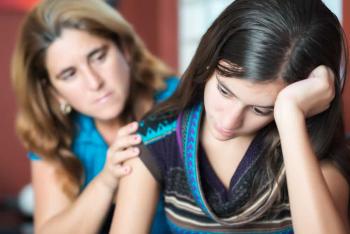