Lack of Communication a Source of Conflict in Relationships

The Proverb "Silence is Golden" May Be Wise Advice Before Making a Judgment About Another Person; But Experts Agree That It Can Be a Costly Mistake in Relationships. According to Kerry Patterson, Co-Author of the New York Times Best-Seller Crucial Co

The proverb "silence is golden" may be wise advice before making a judgment about another person; but experts agree that it can be a costly mistake in relationships.

According to Kerry Patterson, co-author of the New York Times best-seller Crucial Conversations, "couples who argue effectively are 10 times more likely to have a happy relationship than those who sweep difficult issues under the rug."

In his research, Patterson discovered that four out of five people believed poor communication played a significant role in the dissolution of the relationship. When couples avoid discussing sensitive issues in hopes of avoiding an argument, it actually builds resentment in the relationship. He said his research showed "what we don't talk out, we eventually act out."

"The best way to avoid conflicts, and/or do damage control, is to be assertive in your communications, and be as clear as possible," Irwin said.

She also suggested couples avoid having expectations of each other that were not clearly talked through and agreed on.

"Accepting disappointment by a thwarted intention or expectation can allay the upset," she said. "We do not always get what we intend! Seeing it as such, and finding another way to attain that goal can fulfill the expectation."

Marriage and Family Therapist Zora Kolkey said other top sources of conflict in marriage are sex, money and children. She said couples tend to argue over who their children become friends with, the child's choice of friends and the child's use of technology.

To avoid conflict, and an unhappy marriage, Judy Winkler said to remember that the relationship is more important than the decision or stance each person has chosen to take.

"We all want things our own way while we look good to those who matter to us," she said. "If emotions around a conflict last more than 10 minutes, you can be certain it has nothing to do with the current issue - emotions from the past have been stirred."

Soften your judgments by asking yourself why a reasonable, rational and decent person would do what your spouse is doing.

2. Affirm before you complain

Don't start by diving into the issue. Establish emotional safety by letting your spouse know you respect and care about him or her.

3. Start with the facts

When you begin discussing the issue, strip out accusatory, judgmental and inflammatory language.

4. Be tentative but honest

Having laid out the facts, tell your spouse why you're concerned. But don't do it as an accusation, share it as an opinion.

After sharing your concerns, encourage your spouse to share his or hers, even if he or she disagrees with you. If you are open to hearing your spouse's point of view, he or she will be more open to yours. 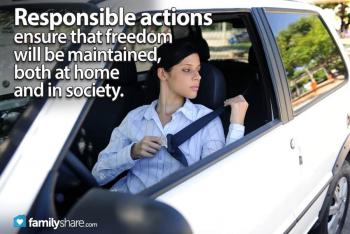 How to Know When to Trust Your Teenager