Liars, Cheaters, Thieves and Me

When It Comes to Cheating, There is One Question Many May Ask. Why Do Cheaters Cheat?

Editor's note: This article was originally published on Rod Arters' blog. It has been republished here with permission.

I have a friend of mine who writes a blog called, "Writing is cheaper than therapy." There is a lot of truth in her title. Writing and blogging and reading others' writings are great ways to work through issues you are dealing with. Though I do write for myself first (aka cheap therapy), I have found that many of my entries have resonated with others as well. Based on some of the private comments I have received after my last blog entry (Before you cheat" 14 things you need to know), I must have struck a chord with some of my readers.

When the topic of cheating comes up, there are few people who take a neutral position. Because of the serious nature of the crime and the emotional baggage it carries, it often brings with it a very passionate reaction. Most people despise the cheater since that emotion is easier and comes naturally. After all, cheating is despicable and non-defensible. Some people offer sympathy, not just to the offended person but even to the culprit. Those who empathize can usually relate to one or the other on some experiential level or they are more in tune with their own fallen nature.

So, why do cheaters cheat? What causes them to even entertain the thought? Why do they take the risk? Do they really think they can get away with it? In a word, yes. Remarkably, every cheater who has ever cheated has done so because of two powerful reasons:

Cheating is the height of selfishness. In that world, there is a cheater and his/her perceived needs that must be met. Nothing else exists. In this narcissistic state of mind, there are a number of lies that must be told and believed before a cheater can even begin to think his/her plan is possible, let alone feasible. Here are the top 10 lies that must be purchased. Interestingly, most of these lies can apply to someone who wants to rob banks, embezzle money, look at porn or even do drugs. The "crime" doesn't matter. The over inflated sense of self and the ability to believe their own lies are essential.

This is probably the most absurd lie of them all but is truly the cornerstone of all the other lies. If this lie can be believed and swallowed, then the rest of them go down much easier. The truth is, you WILL get caught. It's not a matter of if, but when. If the Director of the C.I.A. cannot conceal an affair, what makes you think you can?

2. No one will ever know

This lie is similar to the first but more in-depth in its scope. Not only will you not get caught but this is a secret you can take to your grave. After all, you have all your "bases" covered. All your alibis are solid. All your stories are straight. All your text messages deleted. All your emails erased. No one will EVER find out about it. You repeat this lie over and over until you believe it. The truth is, one day, EVERYONE will know, even if that knowledge occurs after you're gone.

3. What they don't know, won't hurt them

This lie makes a lot of sense to a cheater but few cheaters would want that logic applied to them. Would you want a merchant to overcharge you for a product without your knowledge? Or worse yet, would you want a doctor to not share the diagnosis of cancer with you? I mean, if you don't know the truth, it can't hurt you, right? The truth is, sometimes, what people don't know can destroy them.

4. Everybody is doing it

This is a common phenomenon in human behavior. Thieves think others are stealing because they are. In like manner, cheaters often assume others are being unfaithful because they are. Granted, adultery is rampant in our culture. But the truth is, NOT everyone is doing it. There are many faithful, loyal men and women out there - showing the rest of us what fidelity and commitment looks like.

Downplay. Minimize. Reduce. Common tactics for someone who is playing Russian Roulette with a fully loaded pistol. If it's not a big deal, then why all the lies? If it's not that big of a deal, why the secrecy? If it's not such a big deal, do it openly. The truth is, it IS a big deal and the knowledge of it will devastate everyone who knows you.

6. People already know and are ignoring it

Some of the lies sound crazy once you are living in the truth. This is one of them. There are times when you are convinced that everyone knows and they are turning a "blind eye" to your behavior. This is false anesthesia to the soul. The truth is, no one is condoning your actions. They truly don't know "¦ yet.

7. God will forgive me

This is a case of spiritual gymnastics. The cheater has enough knowledge of God and His word to be deadly. Yes, God will forgive all sins except unbelief (Mark 3:28-29). However, this does not mean you should presume upon His grace or forgiveness (Romans 6:15). Even if God forgives you, it does not mean you will come out unscathed by His consequences (Proverbs 6:29). The consequences for such behavior are truly devastating for everyone in your life.

8. My spouse will forgive me

Maybe they will. Maybe they won't. Is this the risky card you really want to play? Forgiveness does not always mean reconciliation. It does not mean you will be accepted back or restored to your previous position. Forgiveness may be quick but trust will take years. You are making some dangerous assumptions about someone you are hurting.

9. I'm not getting what I need

This may be true but cheating isn't the answer. Just because your employer does not pay what you "need" does not mean embezzling money is the answer to that dilemma. If you are not getting what you need, tell your spouse. Go to counseling. Meet with a therapist. Attend a support group. Talk to a friend. Though cheating may scratch your itch for a season, it won't make the itch go away. There is a deeper itch beneath the surface that cheating cannot scratch. Commit to finding the proper solution for it.

10. It's just a physical thing

Nope, wrong again. It's an emotional thing. And a mental thing. And a spiritual thing. It may seem physical to you but your whole being is involved here (mind, body, spirit), not just one member of it.

For a cheater, most of these lies will sound familiar. They may even have a few more of their own. Some or all of them are essential to believe before the cheating begins. So important are these that you can't continue in the destructive behavior without swallowing one or more of these pills daily.

One day, though, the truth will come out. One day, the lies you digested will make you utterly sick. One day, the world you have created will face the world that is. Reality eventually trumps fantasy and you will wake up to realize the dream is actually a nightmare. The alarm cannot be snoozed. The deeds done in darkness will eventually be exposed in the light. Each and every lie will be addressed by the Truth.

A word of caution for all the non-cheaters reading this. It's easy to throw a judgmental rock at a cheater, particularly if one has cheated on you. It's easy to create a "me vs. them" mentality. After all, you are better than they are since you didn't cheat. Remove your judgmental glasses for a minute and grab a mirror. Or better yet, grab a Bible. It appears that you may not be off the hook either. According to Jesus standard of faithfulness, "anyone who looks at a woman (or man) lustfully has already committed adultery with her in his heart." (Matthew 5:28)

You may not have committed that particular "deed" but all dirty deeds start in the heart and yours isn't as clean as you think. The only difference between your heart and theirs is they followed through on what you have already considered. Or, you just haven't been caught yet. Or your temptations are different. Adulterous thoughts, actual affairs and judgmental pride are all the same in God's book. Consequences are certainly different but hearts are the same. And Jesus didn't come to clean up behavior. He didn't just come to pardon sinful actions. He came to change wicked hearts. And according to His standard, apparently you have one too.

As a former youth worker, business owner, school teacher, coach and inmate, Rod has the unique ability to relate to almost anyone in whatever situation they are in. His thought-provoking blog about life, mistakes, faith, hope & grace has been read in over 175 countries. A popular writer & speaker, Rod draws from his deep well of biblical knowledge and personal pain to encourage others along the broken journey to wholeness. He hosts a private Facebook group for hurting men (called the Man Cave) and enjoys helping others find Hope in the midst of their painful situations. He is divorced with three children.
nextarticle 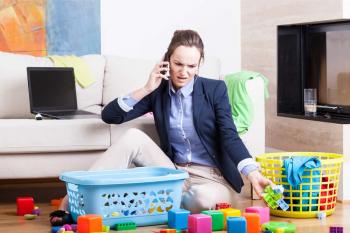 Just Give Up. What Are You Trying to…