Life’s too short so let go of the hurt

The Author Anne Lamott Compares Holding Grudges to Drinking Rat Poison and Then Waiting For the Rat to Die. We Think We Are Punishing Others. After All, They Should Pay For the Way They Hurt Us. But More Often Than Not, We're the Ones Left Hurting.

Sarah hasn't spoken to either one of her parents in over three years. Something about an argument she had with her mom. Every year since then, Sarah has invited her parents to their granddaughter Jenna's birthday party. Every year they send a check instead of coming in person, which Sarah promptly tears up and sends back. Neither side will budge an inch. In the meantime, Jenna is growing up without grandparents.

OK. That sounds pretty silly, right? Not to Sarah it doesn't. When it's our grudge, holding on to it somehow doesn't feel silly. We're perfectly justified for feeling the way we do. So we hold on to our grudges for dear life.

It's a funny thing about hurt feelings - the longer they persist, the harder it is to let go of them. After a while, they begin to calcify, until winning the "I am right" ribbon becomes more important than repairing tattered relationships.

The author Anne Lamott compares holding grudges to drinking rat poison and then waiting for the rat to die. We think we are punishing others. After all, they should pay for the way they hurt us! But holding on to grudges takes a silent and deadly internal toll. More often than not, we're the ones left hurting.

My own grandmother had two aunts who lived blocks apart in a small Idaho town. These sisters didn't speak to each other for 20 years. Finally, one of them died. Then what did the one who was left say? I win ... you lose? Did she feel happy? Justified? Or did she miss her sister, suddenly realizing that now it was too late to make things right?

The phrase, "nursing a grudge" means just that. We care for, nurture and cultivate our grudge. We are so careful not to let it die. To what end? In the hopes that it will live on somewhere deep down inside us, growing like a spreading cancer, infecting our very happiness?

Doesn't matter. Let it go anyway. If you can't do it for them, do it for you. Your grudge has become nothing more than a heavy rock you've been dragging along behind you for too long. It's slowing you down. Cut it loose. You'll feel so much freer and lighter! Let it go and move on.

Never let a friend or a spouse encourage you to hold on to a grudge to protect their feelings. Dave doesn't speak to his brother because his wife Lindsey is mad at him. He apparently insulted her at some point. This is Lindsey's issue to resolve, not Dave's. Lindsey is an adult who can manage her own feelings. Dave has the right to have a relationship with his brother.

We would do well to remember that we are not perfect beings. Our friends and family members aren't either. So we love them, warts and all. Not because they're perfect, but because they're ours.

How might you approach someone with whom you have a long-standing grudge? What can you do to break the ice? What if it's been years since you last spoke? How do you make the first move?

You might pick up the phone and say, "I'm sorry. You matter to me. Let's please put this thing behind us." Sounds simple enough.

What if she responds, "Well, it's about time!" Ouch. And she might. But even if you're not wrong, persist. Invite her out for yogurt. Invite him to dinner. Talk about those things you have in common. Laugh about happier times.

This doesn't mean that your relationship will be right as rain once again. It might never be that. But it will be better. And you'll begin to heal. Choose to let go of hurt feelings. Life is too short to nurse grudges. 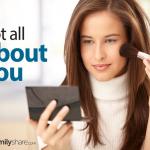 It's Not All About You: How to Communicate…