Fighting is Bound to Happen in Any Relationship, But There Are Ways to Fight Fair, Nicely, and Avoid Big Blowouts.

While growing up, my parents never fought in front of us kids. If they were mad at each other, we usually didn't know it, it was something they discussed behind closed doors or not at all. While it was nice growing up without confrontation in our home, I learned that when I was upset about something it was better to not talk about it then it was to confront it head on. As an adult, I did anything I could to avoid confrontation. Sometimes that meant letting resentment build up and sometimes even losing friends. I thought I was fine. My life was void of negative conversations, and I never had to face those uncomfortable feelings I had. Everything changed when I met my husband.

My husband is a passionate man, who is anything but afraid to say exactly what is on his mind. I quickly learned that if I wanted a relationship with him I would need to learn to confront my feelings. Our first couple years of marriage were full of fights. Mainly over little things that are common those first years of living together. I had no idea how to react to these fights. At first, I would get defensive and go on about why I was right and justifying my actions. This usually just made the fights last longer and become more personal than they needed to be. I felt like I went from absolutely no fighting, to fighting all the time. I needed to find a happy medium.

I soon learned that my husband was not bringing something up just to fight about it, but rather to discuss something that was bothering him. Because I was not raised to voice my true feelings this was new to me. It took some getting used to, but once I started listening to what he was really saying, I started to understand what the actual problem was. That was when we started communicating instead of fighting.

When we do have fights, which will happen, each of us has trigger points that cause an argument to escalate. In order to avoid having things escalate, we established some rules to follow if we do find ourselves in the middle of a disagreement.

1. Never use the word divorce

By knowing we are in this relationship for the long run allows us to be more trusting with each other. If the word divorce is being thrown around in every fight, it puts a stop in the conversation. That word means you are done. You are willing to end the marriage. You do not want to work through the problem. When we took that word out of the conversation and know it is not something we aren't even considering, it allows the fight to progress through its natural course and allows us to trust that even though we are fighting, we still love each other and will work through it.

2. Do not leave in the middle of a fight

Some couples feel giving each other space, time to cool off and gather their feelings is the best way to work through an argument. For us, that doesn't work. By walking away, it is as if you do not want to find a solution, you would rather just leave and be done. Instead we work through the nitty gritty until there is a resolution. It is important to find what works for you and then stick to it.

When we were first married, my husband told me that he hopes we do not lose the niceness in our relationship. The "niceness" was those little things you do for each other when you're dating. Like doing little acts of kindness, being polite, trying harder to stay calm rather than getting angry right away, and basically just being on your best behavior. Sometimes we have to remind each other to be nice, but it has really helped us stay in check.

One thing I personally try to do in my conversations with others is to use my words correctly when expressing my feelings. I took the word "you" out of my vocabulary. As soon as I use the word "you" is when the other person will get defensive. "You" is a very personal word that brings with it a lot of emotion, it is accusing and attacking so it is only natural for someone to want to defend themselves when being approached in this way. Rather than saying "You always leave your clothes on the floor even though I have asked you not to." Try, "I am not sure what to do about all the clothes on the floor, how can we find an answer to this problem?" It allows for a conversation with ideas from both sides, instead of a fight which will mostly likely not result in a solution.

Probably the most valuable thing I have learned is to let my own feelings be heard. I will admit, it is not easy; I am more inclined to keep my thoughts to myself, rather than express them. But this just causes them to boil under the surface and then explode over something small. To avoid this type of meltdown, I now talk about how I am feeling. However, I also know when to pick my battles. If I complain about every little thing that bothers me, it turns into nagging. There are some things I have learned to live with, and it is OK.

I think after seven years of marriage we are finally at a happy medium. We still have fights, but not as many and they resolve much quicker than in the past. I am far from perfect and understand that there are areas of my own life that need improvement. I also know my spouse is not perfect, but I love all of him, flaws, and all. 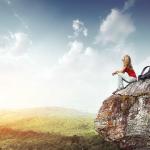 4 Simple Ways to Remember God Throughout the…