Below are 4 simple ways to grow closer to your spouse and overcome "incompatibility", but first, I have to tell you an amazing story...

My wife, Ashley, and I just had lunch with a wonderful friend of ours. She was telling us what happened after her divorce from her now ex-husband (he is also a good friend of ours).

She said that after the divorce, when she felt she was ready to start dating again, her friends talked her into getting an account on match.com. She received her first list of potential matches and at the very top of the list, her top match out of thousands of potential men was none other than her ex-husband! I promise, I'm not making this up!

It got me thinking about all the messages I receive from a husband or wife who feel that they've lost the spark in their marriage. They feel that they've fallen out of love or they've somehow grown incompatible with their spouse. Certainly, there are time when a husband and wife must overcome massive differences in opinion and perspective, but I'm convinced marriages fail not from a lack of compatibility but rather from a lack of commitment.

In those moments when you don't feel as close to your spouse as you once were, and perhaps you're tempted to think your incompatibilities are irreconcilable, I encourage you to pause and try the following. These simple actions can take those feelings of incompatibility and replace them with feelings of intimacy.

The more you communicate the more you'll understand each other's perspectives. When you each have a different perspective, it doesn't mean you're incompatible and it doesn't mean one of you is right and the other is wrong. It's an opportunity to see every situation with more perspective and depth by working together in harmony.

Laughter should fill the soundtrack of your marriage. Have you ever noticed that when you laugh with someone, you instantly feel closer to them?

When you're focused on your spouse's flaws or quirks, you'll always be seeing them through a negative lens. Be your spouse's biggest encourager; not their biggest critic! Focus on the best in them, and you'll end up discovering the best in your marriage.

Bring the playfulness, seduction and flirtation to your marriage. Keep your eyes focused on each other and not on somebody else. Don't ever look outside the marriage for someone other than your spouse to fulfill these desires.

And above all, just don't give up on each other! Marriages don't survive or thrive because of "compatibility." Marriages make it because of commitment. 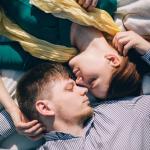