Ex-porn star Crissy Outlaw has been speaking out for the past decade about what drew her into adult filmmaking - and why she eventually abandoned her lucrative career.

"Most people can think about their pasts and can easily hide it ... never sharing it with anyone for the rest of their lives. The evidence and consequences of my past mistakes will never go away," Outlaw writes on her website. "I have to deal with this daily, and it isn't easy. I find happiness in using my past to help others who might be going down a similar path."

Outlaw told the Daily Mail about the sexual abuse she suffered as a young child and described the emotional scars from an abortion she had at the tender age of 17. She described the aftermath of the abortion as "one of the most traumatic things that happened" to her.

"I was fully awake and aware of everything going on during the abortion and my heart was shattered while the life was literally being sucked out of me," Outlaw said of the experience. "It was awful ... my school knew about my abortion and I lost all my friends."

Additionally, during her early years, Outlaw experienced numerous failed relationships that left her feeling inadequate. She described to the Daily Mail the particularly devastating effect that pornography had on her self-esteem.

She apparently felt so "worthless" that she ended up choosing to pursue pornography, aspiring to be one of the women that so many men viewed as the object of their fantasy. By age 23, she had jumped right into the industry, appearing in more than 50 films between 2001 and 2006, and bringing in $1,000 per film - up to $15,000 per month.

"God, if you're real, I need you to tell me," she recalled saying. "I need a sign because everything I know about love isn't right."

Leaving it all behind wasn't all that easy, however, as Outlaw was forced to abandon everything she knew. On her website, she explains that the financial impact alone was quite difficult to contend with. She left her boyfriend, lost her car and could barely pay for food.

"I dealt with PTSD, and I was forced to look at myself in the mirror," she writes on her website. "I didn't recognize the girl looking back at me. I didn't know her."

This article was originally published on Faithwire. It has been republished here with permission. 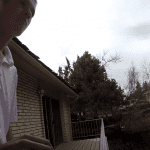 Woman Starts Recording Her Road Trip on Her…