How to Know When a Loved One Needs Your Help

It's important to be able to recognize the signs that someone needs help. You can't fix what you don't know is broken.

Have you ever had a friend tell you these things and wonder if they're true? Something in their facial expression, body language, or tone of voice tickles the back of your brain and makes you think there might be more going on than they're admitting.

But who are you to second guess, right? If there were something they wanted you to know, they'd tell you – wouldn't they?

Knowing when someone needs help can be challenging. Most people don't want to ask for help or admit they're struggling, so they stay silent and try not to let on that they need more than usual.

However, it's often when people are suffering silently that they need help the most. Does this pose a problem, though? How can you help if someone tells you there's nothing wrong?

Seeing the Signs of Suffering

As we go through the busyness of our daily lives, it can be easy to accept that everyone around us is doing okay blindly. No matter what they're dealing with, most people will tell you everything's fine. Great, right? Onward you go.

Most of us, however, can usually sense when something's off. The challenge is that something being off might be as small as having missed their morning coffee or as large as feeling hopeless and depressed.

So, how do you know if they need a friend or a shot of espresso?

Admittedly, it can be tough to tell, and your sensitivity to someone's masked pain can vary greatly depending upon how well you know them. There are, however, some tell-tale clues that can help you decide whether to push a little harder or leave things alone.

If any of the signs below stand out, something is likely going on.

If you've noticed a common theme to the signs above, you do not imagine it. If you didn't, then, I'd be clear – it's change.

When people change for positive or growth purposes, it's great. But negative changes like those above can be signs of suffering.

How to Start the Helping Process

Depending on how close you are with the person you're concerned about, offering help or support can feel awkward. But know that, depending upon how you approach things, it will likely seem like kindness from their perspective. So, consider the following tips if you feel someone could use your support.

Of course, it's not a given that your efforts will be appreciated. Not everyone reacts well to uninvited attention, even if it's with the best of intentions. So, be prepared to respect their space and not take it personally if the person you're concerned about doesn't thank you for your interest.

As an empathetic and caring human being, showing concern for someone who seems to be troubled can feel like personal responsibility. It's just the right thing to do.
In the best-case scenario, the person about whom you're concerned will be at minimum comforted by the idea that someone cared enough to show interest genuinely. However, the worst case is that you open Pandora's box and unwittingly become their best friend or 24/7 lifeline by asking.
When you want to help someone, it can be very easy for boundaries to blur. It can also be easy to overlook, considering boundaries at all before you engage. However, boundaries are crucial to establish for the person you're helping and for yourself.

In the end, though, being able to help someone who needs it is the best part of humanity. You'd want someone to be there if you needed it or if someone you love needs it. So, with the proper boundaries in mind, offering to help someone suffering is worth the effort. 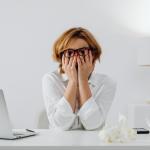