Life is Really Like a Fairy Tale. We Think We Have True Love, and Then the World Sends in the Dragons and Evil Queens. Here Are Ways to Encourage Without Nagging, Inspire Without Shaming, to Be the Inspiration That Sparks Your True Love's Passion.

My son's high school football team was the losingest football team in the history of the school. He began with visions of glory, but in the end his team only won one game. As his mom, watching him struggle hurt my heart.

I could have told him it was the coach's fault, I could have blamed it on other players, I could have encouraged him to quit. Instead, I went to every single game, snow, rain, sleet or hail and stood by cheering him on, yelling, "That's my boy!" I never gave up, I walked the sidelines as his greatest fan. I didn't fight his battles, but I understood them, and I had unconditional love, faith and hope.

When all was said and done, I found him weeping from frustration after the last game of his senior year. I wrapped my arms around him and said that he had done a great job. I believed with all my heart he had done his best by never giving up.

As young couples begin life, they often envision fairy tale existences where they sail through college, embark on a career, buy a home and have 2.5 children, one dog and a cat that never sheds. Then, just like my son, they realize that there is opposition in all things. Even fairy tales have villains, dragons to be slain, witches to be melted and curses to be vanquished with true love's kiss.

The phrase, "Take off your rose-colored glasses," is an old saying that means face reality or wake up and realize life isn't a fairy tale, or is it?

Aren't we all looking for that one true love, and couldn't we all fight our own demons and dragons if we worked together to create a happily ever after? The difficulty with real life is that sometimes prince charming purchases his own dragon, wrapped in a brown paper bag, and sometimes the princess looks in her magic mirror and blows the budget at the spa.

So how do we go about fighting demons and dragons together, instead of fighting each other?

Keep your rose-colored glasses on

Sometimes focusing on someone else's flaws is a great way to avoid looking in your own magic mirror and seeing your own flaws. Watch for chinks in your own armor, work on your own issues while still challenging your partner to work on his. That doesn't mean that you fix him, nag him or shame him. It means you cheer him on as he looks for weapons in his own battle.

Jessie Rosen in her article, "What It Means to Say 'a Couple should Challenge Each Other,"shared the following list of ways to challenge your partner. She said,

"...Challenging someone in a relationship means holding them to the person you know they can be even when they can't see it..."

And, "Healthy challenging in any relationship means an open dialogue of questioning and honesty that makes your person and beliefs known to your partner and vice versa."

Set clear and healthy boundaries about what you will accept and not accept. Discuss them as a couple. Go to battle together with a clear plan, including goals for the future as well as things that will not be tolerated like infidelity.

Every warrior knows you need to train daily. Set time aside daily to connect with your partner, to talk and listen to her day, wishes, dreams and wants. Be a safe place for her to share her deepest desires knowing they won't make Facebook. Then, when you can, encourage her to take steps to make her dreams come true. Be willing to sacrifice for your partner's dreams and be appreciative when he does the same for you. Make a safe place for the battle weary.

As my son's football team lost every game, I told him I was sure that somewhere in this experience he had gained strength that would carry him through other trials in his life. I did not realize how prophetic my words were. This year, once again, I hugged his exhausted body when he returned from fighting as a soldier in the Middle East. Although he was proud to serve his country, he knew in war there is never a true victor - everyone loses something. A lesson he prepared for on rainy Oregon football fields.

Every day we send our partners out into the world, like we send our sons to battle. They don't need a boot in the rear and a list of groceries to bring home. They need to know that we are there, on the sideline, ever vigilant, hopeful, faithfully cheering them on, if not to victory, to return to our loving arms. 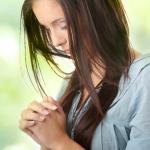 How to Get the Most Out of Prayer