Stitches of love: What I learned from restoring my mother’s vintage dress

Learning from my mother and grandmother increased strengths in my life that had once been hidden.

Many of our grandparents couldn't afford to replace broken furniture, or deteriorated clothes. They often constructed or sewed their own personal belongings - and when they wore out - they rebuilt, mended, or repaired them.

After my mother had passed away, the family sorted through her belongings. A red vintage dress which Mom had delicately sewn for herself - when she was a young woman - captured my interest. On first sight I was enchanted. It was 75 to 80 years old. Because she was the seamstress I wanted her dress all the more.

The sweetheart-neckline was embellished with four small gathered-rows of delicate cream-colored lace. The lace complemented the old-fashioned dress. The lace had slightly yellowed but set-off the neckline in such a way it would have been unthinkable to replace it. Small pockets trimmed with the same lace had been attached to the front of the tiered skirt.

The red dotted-Swiss fabric was a light-weight cotton appearing to have thinned through the years. In places, the dress was thread-bare, worn, and frayed. Unlike my initial response, my secondary reaction was that it hopelessly belonged in a rejection bin. However, part of me could not let go of the sentimental antique dress and Jeanie - my 31-year-old daughter - wanted to wear her grandma's outfit. My love for Jeanie and for Mom motivated me to restore it.

As I worked on the dress I thought about five valuable lessons I learned from my mother and grandmother.

Ask questions of your grandparents before they die.

Recording their answers and stories about their lives leads to writing your own personal histories. My grandma, Lily, wrote her life-story in a Book of Remembrance. She pasted photographs in her book. She cut and glued fancy pictures of roses and forget-me-nots from used greeting cards to accent her stories.

Her life-story taught her posterity the importance of recording their histories so our thoughts and values can be passed down to future generations.

Learn - from the example of your grandparents - to be frugal in purchasing, restoring old things, or creating new ones.

Frugality was important to Grandma Lily. Once Grandma made a Christmas tree from creatively arranging tumble-weeds, then spraying them with gold paint until they glistened. Making something out of nothing - or with little means - was a trait Grandma had established early in her life. And she taught my mom to do the same. Their examples influenced me.

Learn to make-do with what you already have.

Instead of purchasing new furniture, Mom reupholstered the old. She varnished and stained floors and cupboards. Long ago, Grandma Lily painted a brass bed. She painted it white. Two generation later - under Mom's leadership - her children laboriously sanded and scraped the paint off the antique bed then they polished it with Brasso until it became a lustrous shiny bed, a thing of beauty, a twice recycled bed.

When I was a young girl my mother made me a stylish coat out of a rose-colored unused blanket which was in good condition. It was attractive and warm and it impressed my friends. I learned the principle of prudence from my mother.

Stick-to-itiveness. Work on a task until it is complete.

In spite of complexities, my mother never gave up when creating beautiful things and when giving a face-lift to an item. She learned it from Grandma. She passed the trait on to me. Mom made most of the clothes for her 10 children.

I used these things I learned to bring Mom's dress back to life.

How could I possibly revive the dress? Ideas began to flow into my mind. I would line the dress with the exact shade of plain red fabric as the red dotted-Swiss material was. With a sharp pair of undersized scissors and a seam-ripper I tirelessly and meticulously unpicked every stitch of the frail dress: the sleeves, bodice, and the eight tapered-panels in the skirt. I then used pieces of two-sided fusible-web and placed the webbing under the flaws and frays between the lining and the dress, ironing it together.

Relentless efforts consumed my daytime hours and often into the nights. It was tiring but I loved the challenge, the creativity, and the excitement of making something old into something new. I realized my mom would love what I was doing. I felt a closeness and love toward her as I brought her dress back to life.

Everything was sewn in place and the results of my labors were to be tested. When Jeanie wore the dress to an event, her friends gathered around awed by the beauty of her grandmother's restored exquisite-gown.

Jelean was raised in a small farming community with her nine brothers and sisters. She is an accomplished author. She enjoys creating scrapbooks for her grandchildren when they turn 12. Jelean writes about religion, personal and family experiences. She has been married for 51 years and has five children and 19 grandchildren.
nextarticle 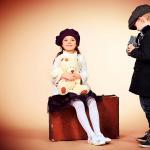