Do you know what is actually destroying your marriage? It may be different than you think.

I have always had a thing for once-in-a-lifetime romance.

I think it started as a teenager when I decided that my favorite kind of books to write were the ones where the two characters fall in love in the end, despite the whole world coming against them. And then it all just steered me on the course - I discovered things like Nicholas Sparks and "The Thorn Birds" (a 1980's miniseries you should totally check out) and "Wuthering Heights" and I listened to Air Supply. Love, love, love - undying, sickly sweet love wrapped in more rose petals and love.

And it only grew. Not just for me, but for the rest of us. Movies, music, novels, sitcoms with devilishly adorable characters and even cuter plot lines that lead up to that anticipated first kiss. (Let's be honest, Jim and Pam in "The Office" made us gush.) And it bred in me the sense of expectation.

I wanted that kind of romance. I wanted to be that leading actress in my life.

But here's the unfortunate thing - the expectation is not a positive thing to have. And it's still something I wrestle with.

Unrealistic expectations that stem from watching Ryan Gosling in a boat surrounded by swans kills a marriage.

Now, before you get all huffy on me, I'm not saying that marriage shouldn't be exciting or playful or romantic. On the contrary. And I'm sure you have a love story that I'd love to hear about and knowing me, I'd think it's the cutest thing ever.

But we have this deadly habit of being so engrossed in fake worlds and fake scenarios and airbrushed magazine covers that we forget what real life is like. We forget that people mess up. That forbidden romance is actually just a sexy term for a dark, unhealthy accident waiting to happen. That men can't read our minds. That fights don't always end in a dramatic romp to the bedroom and rosy cheeks. That romance doesn't just happen all recklessly and unknowingly without us putting in effort, planning things and trying. That cheating on your husband to rendezvous with your childhood sweetheart is actually a very bad idea that never ends well. That the "bad boy" is usually just that. Bad.

We crave what we will literally never have and should by no means ever do either.

And it's killing everything God has planned for you.

On my newsfeed every day I see countless articles that state "Top ten reasons your marriage is failing" or "How you are destroying your husband" or "The top five ways you're headed toward divorce."

I've read it all.

But I've yet to come across anything (and I could be wrong) that simply states what is obvious. We're holding our partners to the standards of unreal people, fake scenarios, and an ingrained desire to have the romance that EVERYONE else has, just because we see it or hear it or read about it. That's the thing that's becoming real to us, while our own lives and our own relationships are becoming sub-par or broken.

I couldn't believe the number of blogs and articles I read when Nicholas Sparks, one of the nation's most successful romance authors who made us all choke on tears at one time or another, announced he was getting a divorce.

WHAT?! Women across the country screamed. How could that be? The man who INVENTED what romance should be like can't keep up his own marriage?! It appalled me the way so many women reacted to the news, calling him a hypocrite and a fake and howling about the devastation this brings and even how could we read another one of his books again??

Along the line somewhere we forgot that Nicholas Sparks leads a life separate from fantasy as well. He says the wrong things and messes up and can't read his wife's mind. They pay bills and don't wake up in the morning with mascara freshly applied and don't dangle from Ferris wheels to get one another's attention. Why would we hold that marriage to the standard of his writing when his writing is merely fiction? But we do that with ourselves too, and we're not even the ones writing it.

I met my husband in a whirlwind kind of way and you might even say the love story is a book-worthy one. And believe me, it was thrilling and sweet and I love us. But let's be honest. Marriage takes work. Sacrifice. Boredom. Stress. Imperfections. Marriage isn't meant to be anything like the things we see on TV. It isn't romanticized, photoshopped and edited. It's raw, real, and filled with layers of mistakes and unedited material.

And that's what makes us built to last

We don't talk about love stories in Hollywood or books being unrealistic because we don't want them to be. We enjoy those stories - and that's OK for entertainment's sake. But it's not OK when it blinds us to reality and makes scenarios that are unhealthy or inaccurate in real life look golden on screen. It's not OK when we lose someone we love because they didn't match the mold that our minds created.

I still love romance. I love Nicholas Sparks. I'm obsessed with "Gone With the Wind" and "Phantom of the Opera" and all the old, timeless love stories that made me adore literature more than anything. But I live here, and I'm writing my own real-life story and it's not even comparable to what I've seen.

But I've learned to love that more, simply because it's real.

Editor's note: This article was originally published on Kayla Lemmon's blog, All Our Lemmony Things. It has been republished here with permission.

Kayla is an avid blogger and photographer, a wife, mom to two bunnies, and a new puppy. She enjoys the outdoors, tennis, and traveling.
nextarticle 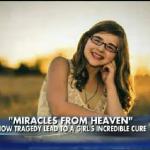 After Falling 30 Feet, This Girl Died and…