The ‘secret ingredient’ to a rock-solid marriage

You Don't Consider This a Part of Marriage Usually, But It Could Make All the Difference.

Today, my wife Ashley and I were talking with a great friend of ours and she was sharing some wonderful news about how her family is growing and doors of opportunity seem to by flying open for her and her husband. She pointed out that it hadn't always been this way. In fact, several years ago, she had been ready to call it quits in her marriage. She recalled the day she announced to her girlfriends at work that she was leaving him, and she was encouraged by most of her "friends" with comments like...

"Girl, it's about time! You could do way better than him."

"I'm jealous! If I could afford a divorce, I'd be getting one too!"

"Yeah, divorce is great. Can't wait for you to come hit the clubs with us single ladies!"

"I'm proud of you for reclaiming your independence!"

There was only one friend who remained silent during the "Pep rally for divorce." This friend waited until they were alone to communicate her true feelings. She said, _"_If you have even the tiniest bit of love left for your husband, you need fight for him. Don't give up on your marriage! You're both going to have to work hard to make this work, but you can climb this mountain together, and I want to help you however I can."

That single conversation gave her the courage to fight for her marriage, and now, years later, her marriage is stronger than ever. It hasn't been easy, but they've worked hard and built a rock solid-marriage, and the friend who encouraged her to stay is the only friend from that bunch who has stood by her all these years as a true friend.

I share this true story, because I think it relates to us all. We all need a friend like that and we all need to be a friend like that. After working with thousands of married couples from all over the world, I'm convinced that one of the biggest factors to determine the longterm health of a marriage is in the friends we choose, so choose wisely!

The right friends can be your "secret ingredient" to a rock-solid marriage! The wrong friends can put you on the fast track to divorce. Be very careful where you get marriage advice. If someone doesn't love marriage, love God, love you AND your spouse, they will not consistently give you healthy advice. 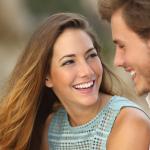