The truth about men and sex

Women Think They Know What Men Want - as Much Sex as Possible. The Reality of What Men Want in a Physical Relationship is Much More Complex.

OK, I know what you're thinking so let's just acknowledge it right now; how can a woman write an article about what a man wants from physical intimacy? I mean, it's akin to a man writing about the etiquette of public restroom sister assistance. It just can't be done.

As a Sex and Intimacy Coach I speak to a lot of people about sex - men and women - and get to hear their struggles, triumphs, dreams and realities. For men, I am not only a listening, and hopefully, helpful ear, but I am also a woman, and it seems to be nice for them to talk about their intimate lives with a female who isn't getting defensive or critical.

That said, men are sharing their hopes, desires and frustrations, and they aren't necessarily what you would think. So, on behalf of great men everywhere, and the great women with whom they are involved, I hope you won't mind me revealing a few of the things your man wishes you knew about sex.

1. He is not the Incredible Hulk

Some of us tend to think that all males past the age of 16 are walking around like ticking time bombs just barely maintaining control over their raging desires. Not so. While media, books and movies portray some men like that, and there are certainly plenty of jokes surrounding the male sex-drive, it's just not true. Many women have just as strong of a sex-drive as men, but our society portrays it and talks about it differently. Most men are plenty capable of a variety of thoughts, a range of feelings and enjoy a variety of experiences. You're discounting your man as an individual if you only see him as having a "one track mind."

Dr. Caroline Leaf describes the male brain as one of "action" and needing a physical outlet especially during times of stress. So, if he suddenly seems to be looking for intimacy a lot more often than usual pay attention to what is happening in his life and inquire. Don't take it as a sign that he has suddenly turned into a raging sex monster and is going to fly out of control any second. And remember, sex is pretty great for most men, and due to biological design, happens fairly easily. Wouldn't you want to experience something so incredibly physically gratifying as often as you could especially with the person with whom you so dearly want to connect? He's happy to be with you intimately because that's his way of feeling close to you. Take it as a compliment.

Believe it or not, men aren't stupid. He knows when you're less-than willing and just being intimate with him because you think you're supposed to, or are just trying to make him happy. He doesn't want that. After enough of that kind of sex, he feels like he's using you, and that's not how he wants to feel about himself or the woman he loves. I've had some men tell me they would rather stop having sex altogether than continue like that.

If you're struggling in the desire department, take a class, read a book, get some professional help, but don't think he doesn't notice and that it doesn't affect him. He wants you to actively want to participate with him and be his lover. He doesn't want to be a task on your to do list.

3. He wants affection, not just sex

When we first enter a sexual relationship it's new and pretty focused. Then, after a time, we start to settle in and routine sometimes takes over. We forget about all the opportunities we have daily to connect physically through small touches, hugs, kisses and cuddling.

I hear many women say their man only seems interested in the act of sex, but when I ask them if they are making a conscious effort to be affectionate with their men other times, often they say they're not. They give me all sorts of reasons - kids, housework, job stress - as to why not. So I ask them, "If you were in the desert all week and then granted a choice between a big glass of ice water to drink or pouring water on yourself but not being able to drink it, which would you choose?" Increasing the overall amount of affection is going to lower stress, increase desire and create a feeling of excitement between the two of you that you maybe thought was lost.

4. He has no idea what to do with your body

If you walked into the cockpit of an airplane, would you know what to do? All those levers, buttons and flashing lights would leave you feeling intimidated at best and terrified at worse. And yet, that's what a lot of women expect of their men. After all, since they're raging Hulk monsters, they have all the expert knowledge right? Wrong.

He wants nothing more than to please you and know that you are getting as much out of your intimate life as he is, but he needs you to actually tell him what you like, want more of, want less of and so on. He might read books or articles about what to do, but that still doesn't give him the knowledge he needs concerning your individual and unique ways you like to be kissed, tickled, hugged and so on. So, give the guy a break, don't expect him to mind read, and just tell him already. You'll be glad you did, and so will he.

Unfortunately, there are some men who are like the Incredible Hulk, only want sex, and think that "duty sex" is just fine because at least they're getting what they want. Those men probably aren't the ones with whom you want to be in a relationship with anyway. The ones worth keeping aren't dragging their knuckles on the ground, but are intelligent and thoughtful human beings with needs and desires just like yours, and are anxious to do anything they can to improve your relationship.

The truth about men and sex

The truth about men and sex may not be what you think!

Alisha is a Life Coach specializing in Sex and Intimacy as well as the co-author of a recently published book titled Real Intimacy; A couple's guide to healthy, genuine sexuality. Find her at realintimacybook.com.
nextarticle 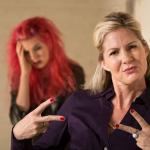 How to Make Your Kids Dislike You in…