The very best gift to your one and only: a new, slimmer you

Too often, dieting is thought of only as a health issue. There is a stronger incentive-and it is called LOVE!

There was widespread interest in our previous article about starting a more logical and practical diet for the benefit of our spouses or sweethearts. It seems that a straightforward diet based on simply reducing the quantity of food you eat has a lot of appeal; and doing it for the one you love most is a greater motivation than doing it for yourself.

Too often, dieting is thought of only as a health issue, and people's incentive is about themselves and their desire to feel better, live longer, and look like they want to look. These are pretty powerful motivations, but usually not powerful enough to reach weight loss goals or to keep weight off once it is lost. And there is a stronger incentive-love! When you undertake a difficult diet and when you do it as a gift to the person you love most-you have maximum motivation. And the best and most natural kind of diet to use is not some complicated or expensive or fad-of-the-month plan, but a simple commitment to eat only half of each meal and to only snack between meals on fruits or vegitables.

The best metaphor for this type of disciplined "portion control" form of dieting is the act of bridling a head-strong and powerful horse so that you can control him rather than him controlling you. If we can learn to bridle our appetites and gain enough control that we can stop halfway through a meal-half of what we normally would eat-we gradually begin to train our appetites to seek quality food rather than quantity, and our enjoyment in eating goes up even as the amount we eat goes down.

As we were thinking about it after that first article, we happened to listen to an episode of the Diane Rehm Show on NPR on which four scientists concluded that getting more fruit and vegetables, along with reducing the amount of food people eat, is the most effective way of losing weight and keeping it off and can have a powerful effect on preventing disease and living longer lives.

But here is the problem: it's so much easier to say it than to do it.

Most people know if they could just limit their intake by half - if they could eat only half of each meal and only snack between meals on fruit or vegetables - they would lose weight and feel stronger and healthier. And they know they should become masters of their appetites rather than slaves to them. And they know that losing weight and feeling better would be the best gift they could give to their spouses and children.

But appetites are strong - very strong. And denying oneself food, or stopping eating before feeling full, is very hard indeed.

The first article in this mini-series suggested the approach of simply eat half of each meal and to bridle appetites until eating half becomes a habit.

Just trying to instantly adopt the eat-half habit is extremely difficult, but there are two "pre-habits" we can develop first which help prepare to put our appetite more under control so we can reach the eat-half habit.

Think of these two pre-habits as the bridle that controls the horse of appetite:

Commit yourself to drinking a tall glass of water immediately before every meal. This will partially fill your stomach, take the edge off your hunger and make it easier to eat only half of your usual meal. Extend the water habit by also taking a drink of at least a cup of water before snacking or eating anything between meals.

Dr. Noall Wolff, who wrote the preface for our new book "The Half-Diet Diet," tells us that few Americans drink enough water and that many are chronically dehydrated without even knowing it. As a byproduct of helping you eat half, the water habit will keep you hydrated.

Forming patterns that help you eat more slowly and deliberately will make the eat-half habit easier. Start by taking smaller bites. Big, full-mouth bites can smother your taste buds and actually make food less enjoyable. Small bites and slower chewing and swallowing allow you to taste your food more and can make your food taste better. We need to quit the gulping, gorging and guzzling of gluttony and start the smelling, sipping and savoring of a more sensory and artistic form of eating.

A simple way to get into this habit is to put your fork down on the table between each of your small bites. As you are chewing and savoring a bite, instead of heaping up your fork with your next bite, set it down until you swallow. Then pick it up and arrange your next small bite.

Once you feel you have mastered the water habit and the slow habit, you are prepared to make a serious attempt at the eat-half habit. When you are ready, set up a check-off calendar and see how many days in a row you can observe the water habit, the slow habit and the eat-half habit. Once you reach 21 straight days, you will have officially gained three new habits that can benefit you, your sweetheart (or your spouse and your children) for the rest of your life.

Watch for the next article in this series which will outline an easier way to approach the one other essential element in the "for your sweetheart diet"-the oft-dreaded element of exercise.

Note: This is the second of four articles in the "Sweetheart Diet" series. Read part one and part three here. 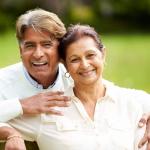 Losing Weight For Your Spouse or Sweetheart