This boy’s recent random act of kindness warms hearts, now the gold standard for all boys

Noah Taylor, 10, Gets Everything He Wants. See Why He Just Did Something Incredibly Selfless For a Boy He Just Barely Met in the Doctor's Office.

Ten-year-old Noah Taylor just did something that shows what happens when parents get parenting right.

Earlier this week, the Indianapolis boy was leaving a doctor's office when he saw another boy without a coat, despite the cold weather outside. Noah, who was raised as a child who "has everything he needs and even some of what he wants, like the hoverboard he just got for Christmas," offered the boy his own coat, WTHR reported.

"As we were leaving a boy and his mother walked in and I asked, 'Where's your coat?'" Noah told WTHR. "He didn't have one, so I took off mine and gave it to him."

Noah didn't end his kindheartedness there. He turned around and asked his mother to give the boy her coat, too.

His mother later posted about the situation on Facebook, saying she too learned lessons from her son.

Noah, who wants to become a police officer, said he hopes the boy keeps his jacket and uses it in the future.

"But I have thought of the kid and now, like, anytime he wants to go out and play he can use that and be warm and maybe not even cold anymore," Noah told WTHR.

You can watch the video below to learn more about Noah's act of kindness. 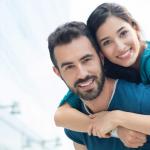 10 Ways to Sweep Your Wife Off Her…