I'm Not Saying This to Beat Up on Anybody, But I'm Trying to Help Us All See That There Are Often Much Better Options Than Divorce.

As an advocate for stronger marriages, I'm always interested to learn from couples who get divorced, so that I can help other couples avoid making those same mistakes.

Some paths to divorce are very understandable. When there are longterm patterns of deceit, addiction, abuse or infidelity, it's easy to see why the marriage ended. In other cases, however, the reasons seem just plain "dumb" to me. I'm not saying this to beat up on anybody or to poke fun at the seriousness of divorce, but I'm trying to help us all see that there are often much better options than divorce*.

*As a quick disclaimer, the point of this post isn't to try to get you to "settle" by staying in a miserable marriage or to make you feel badly for having some of these thoughts about divorce. Rather, I'm trying to help you see the poor excuses that motivate couples to call it quits when they could be focusing on the ways to work together as a couple to make the marriage all it could be.

Here are some of the dumbest reasons I've heard for getting a divorce (in no particular order):

On the surface, this sounds reasonable, but when you get to the root of it, it's dumb. It's a misrepresentation of love. Love isn't just a feeling; it's a commitment. When we base our choices on our feelings instead of our commitments, we're destined to never have a solid relationship. Base your marriage on your commitments and your feelings will usually catch up. Invest time into each other. That's the only way to make a marriage work.

Real love is when you are completely committed to someone even when they are being completely unlovable.

I've seen several recent studies that say money-related issues are now the number one reason for divorce. The reason why it's "dumb" to divorce because of money is that the process of divorce causes more financial devastation than almost anything else (that's why divorce attorneys are rich and divorced people are broke). It's important to get on the same page with money, but don't divorce over it!

3. "I'd be happier alone or with someone else."

Happiness isn't "dumb" but throwing away your marriage in the pursuit of it is. One of the most dangerous lies in our culture is the myth that the "pursuit of happiness" is more important than our integrity, our family, our commitments, or any other factor. Ironically, those who buy into this myth of chasing happiness usually end up as very unhappy people.

"Irreconcilable differences" is one of the most common (and one of the dumbest) reasons for divorce, and it's a myth. There's really no such thing. Couples who make it work aren't the most "compatible;" they're the most committed.

5. "My friends think I should get divorced."

Chances are, your friends are dumb (at least when it comes to marriage advice). If someone doesn't love you AND love your spouse too, they'll never give reliable marriage advice. Besides, you didn't vow a lifelong commitment to those friends, so if you have to choose between new friends or a new spouse, get some new friends.

6. "We have different parenting styles."

So, let me get this straight...you don't parent the same way, but it will somehow work better when you have two different houses, two different sets of rules and expectations, split custody, shared holidays, child support, inconsistent schedules, and a mountain of other post-divorce complications? Parenting is tough. I get it! But, working through it together as husband and wife is so much easier than navigating it after divorce.

Refusing to forgive over a past offense doesn't punish the other person; it only hurts us. It's been said, "Holding a grudge is like drinking poison and then hoping the other person dies." If you don't choose to forgive, you'll take that bitterness with you whether you're married or divorced. Forgiveness doesn't mean they're "off the hook" or that it doesn't hurt; it simply means choosing to pursue healing instead of punishment or resentment.

I'm sure your spouse has issues, but it's not your job to change them. The only part of your marriage (or any relationship) you can change is the part you see when you look in the mirror.

Sex is definitely an important part of marriage, but if you would leave a marriage simply to pursue more sex, then you're on a dangerous path.

Look, I'm not trying to beat you up here, but we make our worst decisions when we're tired and frustrated. Marriage in real-life is a lot harder than it looks in movies, but the real thing is so worth it when you don't give up. If you really want to make your marriage work, it can work. Take it one day at a time. Below are some resources to help you get started.

This article was originally published on Pathoes. It has been republished it here with permission. 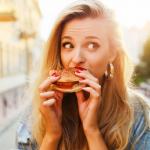 9 Health Foods That Have an Ugly Hidden…