Ways to deal with a compulsive spending spouse

Is Your Spouse a Big Spender? Does He or She Hide Their Purchases From You? Are They Carrying Debt on Secret Credit Cards? Are You Constantly Fighting About Their Spending Habits? This May Be an Indication That Your Spouse is a Compulsive Spender.

Is your spouse a big spender? Does he or she hide their purchases from you? Are they carrying debt on secret credit cards? Are you constantly fighting about their spending habits? This may be an indication that your spouse is a compulsive spender.

According to Terrence Daryl Shulman, director of The Shulman Center for Compulsive Theft, Spending, and Hoarding, arguments over money is the number one problem among couples. Having a spouse who is a compulsive spender can be just as problematic as having a spouse addicted to drugs, alcohol, or eating.

Shulman offers the following advice to help anyone married to a compulsive spender:

"It's important to know what compulsive spending is and what it isn't," said Shulman.

Many couples have differing opinions about money. One may be a "saver" while the other a "spender." However, compulsive spending isn't just a differing train of thought, it's a serious addiction.

Shulman recommends researching the signs of compulsive spending. He offers a checklist and quiz on his website, Shopaholicsanonymous.org

Some questions to consider

Are they emotional shoppers? (Taking shopping sprees when happy, angry, or depressed to feel better)

Do many of the purchases go unused?

Are there large amounts of clutter in the house because of purchases?

Are they neglecting other responsibilities in order to shop?

Researching this addiction, is the beginning to addressing the problem.

Shulman suggest that once the signs are indicated, the offending spouse should be addressed in a caring, loving, but firm way about the problem. Calmly state your concerns without criticizing the person.

"Name calling and yelling will only make the problem worse," said Shulman.

In addition, he advises that both partners be involved in the family finances in order to curb compulsive spending. Going over all the credit card statements and bills together can help prevent secret purchases.

If your spouse is in denial about the problem, outside intervention may be needed. Friends and family members, who have witnessed the problem, can help emphasize the seriousness of the problem.

Shulman advises compulsive spenders to seek professional help to address the emotional issues. "There is only so much a person can do on their own. This needs to be taken as seriously as any other addiction," said Shulman.

Though the cost of such treatment can be expensive, couples should consider the savings that will be gained from the addiction being treated.

Be prepared to be involved throughout the entire process. This isn't just one spouse's problem it's a problem to be worked out together.

Know that this process may require sacrifices such as, blocking shopping channels, monitoring computer usage, and accompanying or taking over shopping excursions.

Above all, the compulsive spending spouse, needs someone they can trust and depend on during and after recovery.

A 12-step fellowship for debtors trying to recover from money problems and compulsive debt.

Bought Out and Spent: Recovery from Compulsive Shopping and Spending

A book by Terrence Daryl Shulman, director of The Shulman Center for Compulsive Theft, Spending, and Hoarding contains stories and guidance for those affected by compulsive shopping and spending.

Tequitia Andrews is a freelance writer and artist based in Virginia catch up with her at www.browngirlart.com
nextarticle 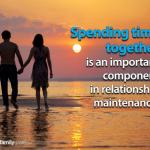 Relationship Maintenance: It's the Little Things